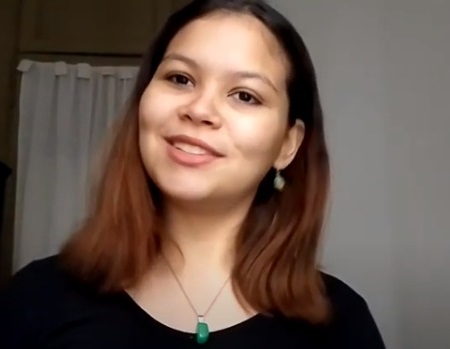 “Hi! Hello! My name is Laura, I am from Palau and my goosebump moment is the first time that I tried Baklava. Baklava is a Turkish dessert consisting of filo pastry filled with nuts or pistachios and other spices. Before I tried it, I had only ever seen it in videos and I was very curious. Then my best friends found this Turkish bakery and they took me there and we tried it. We tried a bunch of desserts and Turkish coffee, but let me tell you, the Baklava itself was a life changing experience because I have never tried anything like that before. It was sweet but it wasn’t overwhelming. It was divine. That is my goosebump moment”.

Baklava is a traditional dessert of Turkish origin, although it is also consumed in other countries such as Lebanon, Armenia, Iran and even Greece. Baklava consists of a mixture of seeds such as walnut and pistachio, nuts wrapped in filo pastry with a touch of honey or syrup.

It is said that baklava originated in ancient Mesopotamia, but there are versions that claim that it was the Assyrians in the seventh century BC who placed layers of bread dough on crushed nuts and moistened each layer with honey to finally bake it in their primitive ovens.

Baklava was considered a dessert for wealthy families and was prepared for special occasions or celebrations. It reached Athens thanks to sailors and merchants who traveled to Mesopotamia and who did not hesitate to take sweets with them. That is how the flavour began to spread.

The history behind this dessert

Almost all countries in the Middle East, the Eastern Mediterranean, the Balkans, and the Caucasus claim Baklava as their own and prepare it in their own way. However, if we consider that these regions were part of the Ottoman Empire when this dessert spread, it could be said that the Baklava we eat today is of Ottoman origin.

During the Ottoman period, this dessert took on its most refined, sophisticated, and delicate appearance. The first Ottoman record of this dessert is found in the cookbooks of the Topkapi Palace. There are also other mentions from which it can be concluded that Baklava was consumed in almost all the territories of the Ottoman Empire, in palaces, homes, banquets and festivals.

At that time, just after the end of the month of Ramadan, the Sultan would send trays of Baklava from the Topkapi Palace to the corps of janissaries and other military units. In front of the palace, the soldiers would receive the Baklava to be transported to the military barracks in a lavish ceremony. The trays were lined up in front of the kitchen of the Sultan’s palace and the soldiers who received them were lined up as well.

The Grand Vizier would take the first two trays on behalf of the sultan, as the sultan was considered the head of the janissaries. The soldiers would take the remaining trays and carry them on their shoulders. The chiefs of each regiment walked in front and the tray bearers behind.

The people of Istanbul would take to the streets to watch the magnificent parade. This tradition that turned Baklava into a symbol of the Ottoman sultanate was carried out until the corps of janissaries was suppressed.

Greeks and Turks have been at each other’s throats for centuries for many reasons, but one rarely mentioned rivalry revolves around the origins of Baklava.

The history of this delicious delicacy is quite controversial and unfortunately, not very well documented. Many ethnic groups such as Greeks, Turks and Middle Easterners claim Baklava as their own and prepare it in their own way.

The “Baklava Conflict” has been simmering for centuries, but erupted into a war in 2006, when the Greek Cypriots decided to call Baklava their own, a definite sacrilege according to the Turks!

Turkey, as an aspiring EU member, even took the issue to Brussels. Finally, in 2013, the EU awarded the “protected status” award to the Turkish Baklava of Gaziantep, closing the sweet dreams of Greeks all over the world.