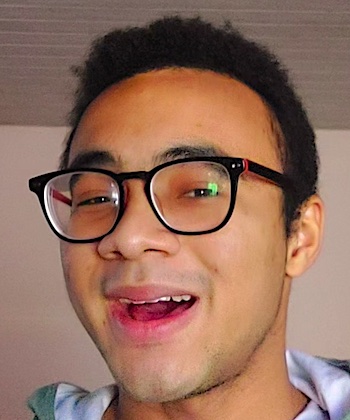 “Hello there! My name is Luis. I am from Panamá, and I am here to talk about my goosebump moment. That would be when I was watching the series “WandaVision”, episode 8 season 1. The last fight between Wanda and Agatha Harkness. They were fighting. We all thought Wanda was going to lose, but instead of that she did this really cool energy burst and she took the form of the Scarlet Witch. But before that she told Agatha something like “I do not need you to tell me who I am”. Something like that. And then she transformed into the Scarlet Witch which was really amazing for all the Marvel fans because something like that had never happened in the Marvel universe before and I had goosebumps because it was so amazing. I mean the form she talked to Agatha and the way she defeated her, it was uncanny. I was talking to a lot of my friends and family that are Marvel fans as well and they really enjoyed that moment as well. So yeah, there you go, my goosebump moment. Yeah bye!”

Agatha is defeated by Scarlet Witch and her true powers

“WandaVision”, starring Elizabeth Olsen and Paul Bettany, has won over Marvel Cinematic Universe fans not only for its plot, but also for its fresh take on superhero stories.

With Agatha threatening Wanda and holding Tommy (Jett Klyne) and Billy (Julian Hilliard), she counters that she can use her powers on the witch. With the children out of danger, the two begin to fight. In the middle of the fight, Harkness reveals that she can absorb energy, which causes Scarlet Witch to begin to weaken.

Wanda throws a car at Agatha and crashes her into a house, but when she checks, the body is gone. When she turns around, she runs into White Vision, who ends up attacking her. It is here that Vision, the one who was living in Westview, appears and the two confront each other.

While this is happening, Agatha Harkness appears out of nowhere and heads to the center of the city, which forces Wanda to follow her. There, the witch tells the avenger that it is time for her to accept reality and cancels the spell over the city. The citizens immediately begin to accuse and others to plead with Wanda.

In the final minutes of “WandaVision”, we see how Scarlet Witch’s mind tricks don’t work as she expects and, with what little magic she has left, she fights Agnes. What no one expected was the spell she had placed around Westview to stop Harkness’ powers.

After telling what she had done, Wanda becomes Scarlet Witch in her entirety and decides her enemy’s fate: she will live in her created reality forever. While the avenger won, she had to make a sacrifice: closing the hex was going to cause her to lose her family.

After saying goodbye to her children, she and Vision speak for the last time. “You are my sadness and hope, but mostly my love,” Wanda tells her partner seconds before disappearing. With Westview free, Scarlet Witch flees the scene.

“WandaVision”‘s post-credits scene reveals her whereabouts and how she is now studying the magical book Darkhold, possibly with the goal of bringing her children to life and learning to master its power.

Agatha Harkness, a witch with a lot of experience

Agatha Harkness is a witch originally from Salem, Massachusetts, who was accused of practicing dark magic by her own coven during the Salem Trials. Hundreds of years later, Harkness became aware of the creation of an anomaly caused by Wanda Maximoff and became obsessed with finding out how Wanda Maximoff had effortlessly made use of advanced magic.

Eventually, Harkness infiltrated Westview by adopting the alias Agnes and took up residence in the home of Ralph Bohner, whom she kept as a mental slave. She befriended Maximoff and eventually revealed her identity to her, leading them to fight a final duel, a conflict in which Harkness was stripped of her powers and condemned to live as Agnes permanently with no memory of her past.

The Scarlet Witch of Marvel’s Avengers, who today is one of the Avengers’ favorite villains/heroines, wasn’t always powerful. She literally rose from the rubble of her collapsed building, in which she lost her parents.

This Marvel star, also known as Wanda Maximoff, has a resilient history that has made her powerful. After being orphaned and subjected to experiments, she acquired skills that she tries to perfect to make the world a better place.

Wanda Maximoff, played by Elizabeth Olsen, and her twin brother Pietro, were born Sokovian. Both survived an explosion in the building where they lived with their parents, who did not manage to survive, as they did.

They were trapped in the rubble, where they remained buried and terrified that the second missile, which landed in front of them, would explode. On that deadly device was Stark’s name.

After a few years, she and her brother volunteered to undergo genetic experimentation tests supervised by HYDRA’s Baron Wolfgang von Strucker, who used Loki’s scepter to potentially grant them supernatural powers.

There were few survivors of these experiments, among them were Scarlet Witch and Pietro Maximoff. It was there that their abilities and powers emerged, which they used to help the robot Ultron, who shared their contempt for Tony Stark.

This alliance was broken when the siblings discovered the true nature of Ultron’s plans. That’s when they switched allegiance and began their battle against him. Thus, began Scarlet Witch’s path to becoming one of the Avengers.

Scarlet Witch is a powerful telekinetic. With her mind she can lift and throw objects as big as a car, other humans, and different things, to defend herself from her enemies.

WandaVision surprised critics and audiences. And it did so at the best possible time. After continuous postponements of premiere dates for Phase 4 of the Marvel Cinematic Universe, the series became the center of all eyes.

As if that wasn’t enough, WandaVision premiered on January 15, 2021, during the pandemic crisis, while the series didn’t seem like the immediate choice to succeed in that context.

But it succeeded and became a brilliant way to analyze grief, mourning and bereavement. As if that wasn’t enough, the Marvel Cinematic Universe dared to touch on adult themes. Wanda was a powerful character wounded by tragedy. The world around her was a scene of suffering, built to suit her. The story ended up becoming the phenomenon of the season and the franchise’s first major triumph after months of uncertainty.

But the adventure was not only in front of the screen. According to Rolling Stone in an interview with the actors and producers, the series went through several revisions and curious possibilities. For months, the creative team analyzed how to use the extraordinary novelty of a Chaos Witch capable of creating reality in the plot.

As creator and director Matt Shakman told Rolling Stone, the main driving force for “WandaVision” was the difficult times the world was going through. For Shakman, it was of considerable importance to reflect on “themes of grief and loss.” The creative freedom allowed the team to consider the idea of turning the show into a story experiment.

So, the main idea was to bring to television the complicated love story between Scarlet Witch and Vision, which in the comic book version encompasses its own story arc. For television, the idea would have to be simplified, but still concentrated on analyzing Wanda’s mental state.

The show received 23 Emmy 2021 nominations, including Best Series. “WandaVision” has nine episodes, which premiered every week from January 15, 2021. The final installment was released on March 5 of the same year through Disney Plus and will be connected to the movie Doctor Strange 2.