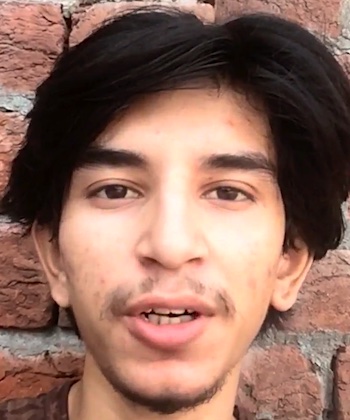 Euaas Niaz: “Hey guys! I come from Pakistan. I have quite a few goosebump moments, but the one I am talking about today is my goosebump moment from a fantasy movie named Harry Potter. As far as I recall, it happened almost six years ago when I first watched the Harry Potter movies on the recommendation of my best friend. Before that I had only heard about it, but never watched it. I watched the first movie, and then I was hooked. I actually have a habit of imagining myself as fictional characters. I started to imagine myself as Harry Potter. But my goosebump moment happened at the end of the movie when I saw Wizarding Chess. As a fan of chess that thing really clicked in my mind. The huge chess pieces, looking life-like and lifeless at the same time, were just incredible. The movie makes it more goosebump-worthy, by making the pawns come to life to stop Harry, Ron and Hermione. It motivated me to watch the entire movie franchise in two days. So, this is basically my goosebump moment. And one of the best moments of my life. What’s yours?”

One of the most curious scenes in the first of the movie “Harry Potter and the Philosopher’s Stone” is the magical chessboard. After a hard first year at Hogwarts, Harry Potter has made two good friends: Hermione Granger, a very nice girl, and Ron Weasley, a young man somewhat absent-minded but very fond of chess, specifically magical chess.

The fact is that chasing the elusive Professor Snape, who they believe wants to steal the philosopher’s stone which will give him immortality, the three little wizards must go through several tests that keep the powerful treasure. One of them is none other than a life-size magical chess.

Each of the characters is placed as a piece to play taking the black ones since the white ones are the ones guarding the passage. Hermione occupies the queenside rook square, Harry the position of a bishop and Ron gets on a knight. The game goes on with a dedicated Ron leading the black side, deciding the moves, and trying to defeat the white pieces commanded by the aggressive queen.

The plot of this movie begins when Harry Potter, as a baby orphan survivor of an evil curse employed by a dark wizard, is left at his aunt and uncle’s house, the Dursleys. Harry grew up in the house of his aunt and uncle who hid his true family history from him, and shortly before his birthday he began receiving letters from Hogwarts: School of Witchcraft and Wizardry, but his uncle would not allow him to read them, and they moved to a house in the middle of nowhere so they would not be found.

However, the night Harry turned eleven, Hagrid appeared to take him to Hogwarts, and that was how Harry learned that he was a wizard and that his parents did not die in a car accident as his aunt and uncle had told him, but were killed by Voldemort, the same one who used the curse on him and as a result he got the scar on his forehead.

The Dursleys tried to prevent them from leaving for school, but Hagrid and Harry managed to get out. That same day, they went to Diagon Alley to buy the school supplies Harry needed to begin his studies in magic and there he discovered that he was famous among wizards.

Sometime later, Harry takes the Hogwarts Express train to Hogwarts, where he meets Ron Weasley, a red-haired boy son of wizards, and Hermione Granger, a very intelligent girl daughter of Muggles. When they arrive at Hogwarts School of Witchcraft and Wizardry, the three of them enter the same Gryffindor house, after being chosen by the Sorting Hat.

The film saga, inspired by the books written by J.K. Rowling, became a success since 2001, when the first Harry Potter movie was released. This is thanks to the story that grew along with its protagonists, the unforgettable trio of Harry, Hermione and Ron, played by Daniel Radcliffe, Emma Watson and Rupert Grint. The vision of various directors endowed the films with a singular magic.

According to the demands of writer J. K. Rowling, the main characters, and most of the rest of the characters, had to be played by actors of the same nationality as their fictional counterparts. Thus, the auditions for the trio of protagonists were focused on finding three children of English nationality. In the case of the adult actors, this requirement was also respected, with a few exceptions.

Chess is one of the oldest games in the world, dating back more than 1500 years. It has evolved as it spread around the world to become the game we play today.

A game of chess can be more tactical or more strategic in its approach. In any case it is necessary to adapt to what happens on the board during the game. Neither the mood we are in nor the decisions we have made should influence this. The same thing happens in life. Many times, we are forced to face situations and circumstances on the fly and without being prepared for them beforehand.

More about the Harry Potter movie: