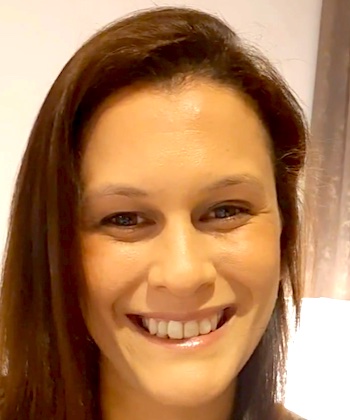 Alexandria: “Hi, I am from South Africa. My goosebump moment is stepping in front of a group of women and coaching them in a boxing session. Watching them, witness the courage and strength they have both within themselves and their physicality as well, both within my country and outside of my country in the Arab world. Where women who wear hijabs everyday can walk into a boxing room, box a bag, stand together, see each other and honour each other in their strength. Feeling the music, lifting the vibration in the room and inspiring each other to live better lives, and braver lives as women across the world. Similar to the clip you will see in the “Grey’s Anatomy” video.”

Women in the boxing ring

Because of the apparent aggressive and combative nature of boxing, it is often considered a male sport. However, women who pick up boxing gloves can also be very competitive. Women’s boxing is an art and has its own specificities from its history to its techniques and current practice.

For many male boxers, the goal is to triumph in the ring while, for women, victory often lies elsewhere: in losing unwanted centimeters, toning up, getting leaner, becoming more dynamic and flexible. But, of course, there are also beautiful victories, won in the ring!

It is also important that women inspire each other to live better lives, and braver lives for that matter, as women across the world. Similar to the clip you see below in the TV-series “Grey’s Anatomy”.

It wasn’t until the 1970s that women began seriously training for the ring and fighting, although they struggled to get fights and be accepted by the boxing establishment. However, the fitness movement of the 1980s helped make boxing more accessible to women.

Gender discrimination lawsuits have also facilitated the rise of women’s boxing, especially in the United States. Lawsuits against organizations such as USA Boxing and the Golden Gloves Tournament, in which women demanded the right to compete in amateur bouts, opened the doors of opportunity for female athletes, regardless of the outcome of individual lawsuits.

In 1993, USA Boxing had sanctioned women’s amateur boxing, and AIBA followed in 1994. In the 1990s, women were also allowed to box in Canada and in numerous European countries, such as Russia, Norway, Denmark, Sweden, Finland and Hungary, and the Golden Gloves organization opened its tournament to women.

Women’s boxing became an official Olympic sport at the London 2012 Games. In amateur boxing, women follow the rules of men’s boxing with a few exceptions: rounds are shorter, and women wear chest protectors, with groin protection being optional.

A new craze for this discipline

Women’s boxing is an art, at least as much as ancient karate or jui jitsu. This discipline differs from men’s boxing and has its own specificities. From its history to its techniques and current practice, here are all the secrets of women’s boxing, a discipline of the mind, body and spirit!

Things really started changing more in 2008, following the release of the movie “Million Dollar Baby”. Since then, and after the inclusion of women’s boxing in the 2012 Olympic Games, registered female boxers in the United Kingdom have increased from 900 in 2009 to 35,000 in 2017. Women now account for 21% of English boxing participation overall.

Between strategy, tactics and aggressiveness, you’re probably wondering what distinguishes women’s boxing from men’s boxing. This is normal, because men’s boxing appears more often in the media than women’s boxing: it is easier to name a male world champion than a professional female boxer.

If boxing is considered a combat sport, it is for a good reason: apart from a few variants that can be practiced barehanded, most of it is done with specific boxing equipment for both men and women. Both men’s and women’s boxing have their particularities.

Women can also be very competitive, as in the case of British champions Katie Taylor and Nicola Adams, who won gold in boxing at the 2012 London Olympics. They were the first Olympic medals awarded to women in boxing, two of the three gold medalists being from the UK.

However, for most women, 80% say they prefer to practice educational boxing or boxing training, focus on other aspects, such as fitness, self-defense or getting in shape.