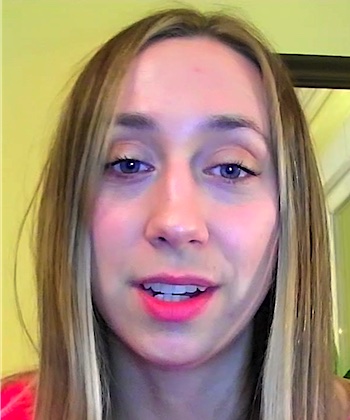 “Hi! My name is Matea and my goosebump moment is me watching a Lady Gaga documentary where she openly talks about her mental problems and her physical illnesses that she has been struggling with during all these years that nobody even noticed. Like, because we sometimes think that those celebrities are, you know, all rainbows and roses. That their lives are happy, just because they have money, and they are successful, but that is not true. So, the whole story about her becoming famous, and becoming who she is. How she did not give up, even though people made fun of her, and did not actually believe in her. She really stood up for herself and showed the world that there is nothing that can stop you except you. So, she really motivated me, and made me feel like I can do anything, and that gave me a hell of a lot of goosebumps.”

Joanne Stefani Germanotta, Lady Gaga to the artistic world, taught herself to play the piano as a child and holds the record for being the most searched woman on the Internet.

Everything she says, does, sings, edits and records is the fruit of comments for and against. She is a woman whose nature is based on being herself in a very particular way.

Such a remarkable personality is worthy of an exhaustive and intimate review to get to know the real woman behind the stage name, the woman under the stage and the woman who cries in the face of her fears and confronts them. Her career and her straightforward way of dealing with various drama-filled situations have led to the creation of the documentary “Gaga: Five Foot Two”, the definitive material on Lady Gaga’s life and career.

Director Chris Moukarbel deftly takes us into Lady Gaga’s intimate world, allowing us to experience the journey, conflict, passion, and complexity of a deeply personal creative process behind this unique artist.

“Gaga: Five Foot Two” allows fans of the artist to enter the heart of a woman who has dared to stand up to social conventions. However, that bravery also has behind it some low points and moments of anguish that the singer has dared to show unabashedly.

A life full of ups and downs

The goal of “Gaga: Five Foot Two”, the Netflix original documentary, is to get to know the person, the human being behind the makeup, the wigs and the glamour, Stefani Joanne Angelina Germanotta. This production presents an intimate, honest, and unabashed look at the artist’s life.

Co-produced by herself and directed by Chris Moukarbel (“Banksy Does New York”), “Gaga: Five Foot Two” documents the personal and artistic process that the singer goes through from the composition of her album “Joanne” to her triumphant Super Bowl performance, a spectacular performance that took her to the top (literally) of the pop firmament.

“Gaga: Five Foot Two” raises the curtain in a grandiloquent, almost mystical way, with the image of Gaga ascending to the heavens while a ceremonious piece of choral voices plays, to then show us the singer in the most everyday situation possible, at home, feeding her dogs and cooking with her family.

This contrast is one of the driving forces of the documentary, a journey full of ups and downs that delves into almost all the singer’s professional facets while revealing her insecurities, personal dramas (at the beginning of the documentary she has just broken up with Taylor Kinney) and health problems.

Behind the star, what we find is a woman very attached to her family who suffers from severe anxiety but works tirelessly to always maintain control of her career in an industry still dominated by men, a young woman who stopped growing up at 21 and has decided to mature to always move forward, despite the acute pain that accompanies her since she suffered a broken hip four years ago.

In bed with Gaga

“Gaga: Five Foot Two” will inevitably be compared to “In Bed with Madonna”, the 1991 documentary about blonde ambition, but the approach with which Gaga’s approaches its subject is completely different, more interested in bringing to light the loneliness and less flattering side of a media idol than in building a myth around her.

Despite this, there are times throughout “Five Foot Two” when it can feel like we’re watching a self-indulgent hagiography, especially during certain passages where Gaga tends to exaggerate her emotions or overreact (while her team must play along), but then she surprises us with a moment of overwhelming vulnerability or expressing her fears and frustrations without caring what others might think of her.

It happens for example during the rehearsals of “American Horror Story: Roanoke”, where we see the Golden Globe winner getting angry because no one has warned her that they had changed her lines, an outburst that would be more typical of another Ryan Murphy series, “Feud”.

Precisely another of those moments has to do with Madonna, whom she mentions at the beginning of the documentary to explain that she has always admired her, but that, being Italian, she has a problem with people who don’t say things to her face: “I want Madonna to push me against the wall, kiss me and tell me I’m a piece of shit”.

It is these instants in which Gaga relaxes and shows herself naturally that make the documentary fulfill its goal of humanizing the extraterrestrial despite the circus that is mounted around her.