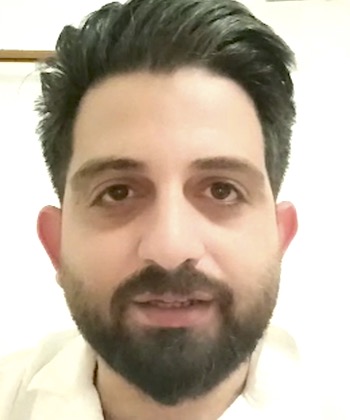 Danielle: “Hello, my name is Danielle and I’m from Libya. My goosebump moment was when I was watching the X-Factor Australia and when a guy whose name is Emmanuel started singing. A person with this disability, he is a handicap person, and he was a guy with no identity because he was found in a war zone. He did not know his family and he was adopted by a lady. It was a kind lady. It was very emotional when he started a song which was “Imagine” by John Lennon and you can imagine a person, a handicap person with this disability, started singing this great song. This was my goosebump moment. So, thank you for watching and bye.”

An inspiration to millions of people

Emmanuel Kelly became a media sensation in 2011 after his audition on Australia’s “X Factor” singing “Imagine” went viral and inspired a billion people around the world with his performance. From there, he has gone on to perform in other iconic places, such as the United Nations.

This young Iraqi, who suffers from malformations due to chemical bombings from the war, has seen his life change because of his voice and perseverance that showed that nothing can stop him.

Emmanuel Kelly was found by two soldiers in Iraq as a baby, half-dead in a box in a park. With no birth certificate, no passport and no known identity, it is nothing short of a miracle that he is alive today.

Taken to the Mother Teresa orphanage in Baghdad, where he met his now brother Ahmed, Emmanuel and Ahmed spent the next 7.5 years as children of war, living a nightmare, experiencing and seeing the worst of humanity. Every day they wondered if death would claim them, or if they would live to see another day.

Humanitarian Moira Kelly heard about Ahmed and Emmanuel while working in Albania. Months later, Moira flew to meet the brothers and immediately fell in love with their energy, their will to survive and their passion for creating a world filled with love. Two and a half years later, after many complications, Moira brought the brothers to Australia to undergo life-changing surgeries.

Over the next 14 years, Emmanuel underwent 6 surgeries, overcoming major obstacles such as learning to walk and feeding himself with a knife and fork. But Emmanuel’s biggest obstacle was learning to accept and love himself inside and out, overcoming his insecurities.

After his success on the X Factor, Emmanuel Kelly managed to release his first music video for his song “Never Alone”. The video features many celebrities and social impact influencers who joined the #NeverAloneChallenge to advocate for global mental health and to encourage people to embrace and authentically connect while going through the Covid-19 pandemic.

The #NeverAloneChallenge involves viewers and fans expressing themselves creatively through photos and videos about what they do when they feel alone.

Kelly wrote the song “Never Alone” when he was just 11 years old, from the heartbreak of watching his mother go through the loss of a child, a boy named Edis. He was about to give up his humanitarian way of life when he felt something telling him that he was not alone, to keep fighting and not give up.

The song entered the charts, reached the top 100 in Australia and in different parts of the world, but did not have the impact he wanted. At the time, the song was more of an acoustic pop ballad, with slow rhythms and a melancholic sadness.

That was why Kelly got together with legendary DJ Paul Oakenfold in 2019 and remixed it with a higher energy pop sound, creating the chorus that one can’t stop singing along to. He also had the idea to get celebrities involved. He asked several celebrities he knew and within 24-72 hours, Kelly received three videos from major stars.