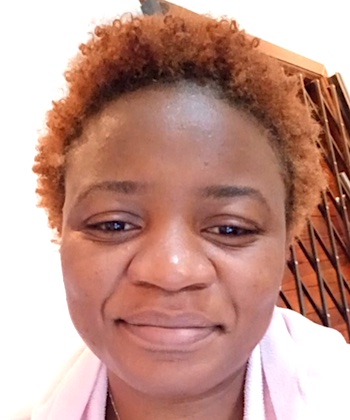 Jessica: “Hi I am from Zambia and my goosebump moment is the song “Giant Killer” by Pompi. So, Pompi is a local Gospel artist and he has got a song called “Giant killer”. My country for the longest time has not had facilities in place to deal with mental health issues so we have had to really rely on the church and religious spaces to be able to talk about mental health illness and having to deal with the issues that we face in society. So, “Giant Killer” by Pompi came to me at a time in my life when I was really going through a lot of struggles in my life. I was not sure about where I was going and whether things were really going to work out or not. But that song, just listening to it really lifted my spirits. So, the song talks about the story of David and how David conquered Goliath. So, the message behind it is that we all face different giants, not the physical ones obviously that David faced, but the countless problems that we have in our lives. But just know that you will be able to conquer them. If David was able to conquer Goliath, then you can conquer your problems.”

Chaka Nyathando, known as “Pompi”, is a Zambian gospel musician who has been in the music industry for over a decade. His music is very much inspired by the gospel message and is a fusion of Afro-soul, R&B and rap.

Apart from music, he was selected in 2011 by former President Rupiah Banda to represent the youth for “Tomorrow’s Zambia” awareness campaign. He was also one of the ten Global Shapers selected to represent Zambia at the World Economic Forum and create the so-called Lusaka Hub.

Pompi has had the opportunity to be recognized throughout Africa. In 2011, he was voted winner of the BNB (Born and Bred) award in the Best Gospel Artist category and in 2012, he released an inaugural album called ‘Mizu’. The music project was the bestselling album in Zambia for over 12 weeks.

He was also named African Youth Ambassador and has received recognition from Prince Africa Zulu of South Africa and the President of Zambia.

His song “Hipolopolo” was used by SuperSport as the official song during the Zambian soccer league and through the U.S. State Department, he toured Zambia to study how music is used for civic engagement.

His album “Mizu” was followed by the release of the album “Broken English” (2015) and he was the first Zambian artist to be invited by Prince Africa Zulu to perform at the Royal Onkweni Music Festival.

The main objectives of Pompi, who in addition to being a singer is an entrepreneur and CEO of Lota House, are to make music that inspires and highlights the beauty of African culture.