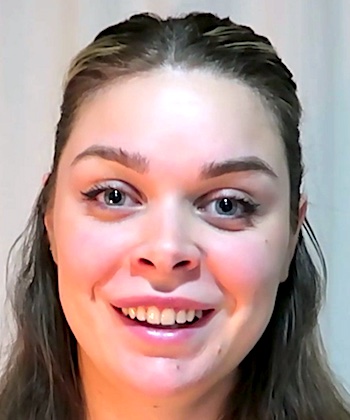 “My name is Aleksandra, I am from Serbia. My goosebump moment comes from Rihanna’s Fenty X Savage show. It is a perfect combination of dance, art, music, and fashion. It is a provocative and extravagant event that pushes every border of what beauty means. We are used to beauty and fashion being presented through perfect body types and perfect female models, but not here. Rihanna shows that every human being, no matter their gender or their race or their body type is beautiful. At one point my eyes even teared up and I hope more people follow suit, and create pure art and positive vibes.”

A show that claims diversity and inclusion

Singer Rihanna’s lingerie brand has been gaining relevance in the world of fashion in recent years and the Savage x Fenty program on the Amazon Prime Video platform has demonstrated this.

One of the reasons for the success of the singer’s business is the claim that sexy lingerie can and should be available for all body types. In this way, Rihanna has spent years fighting against body discrimination, including a multitude of sizes so that anyone, outside the regulatory bodies, can access her clothing.

Nothing is further from the inertia of a conventional fashion show. Singer and businesswoman Rihanna puts on an impressive show to launch her collection. It’s hypnotic: you enter the Amazon Prime Video platform and a world opens up where clothing design becomes pure art. Representation exceeds product, performance exceeds business.

Held at the Westin Bonaventure Hotel & Suites in Los Angeles, the Barbadian singer includes some of the best-known faces of current modeling and other big Hollywood stars in her fashion shows. Among them, some of the great stars of recent years of Victoria’s Secret, such as Behati Prinsloo or Adriana Lima, have wanted to join Rihanna’s firm.

They have also been joined by figures as prominent as Cindy Crawford, one of the best top models in history, who has been in charge of kicking off the show.

Live music hasn’t been lacking either, in a parade that has been given rhythm by such well-known artists as Ricky Martin, Daddy Yankee and Normani, and others who aim to reach the top such as NAS, Bia, Jade Novah and Jazmine Sullivan.

Lingerie is for all bodies

With this parade, Rihanna has once again demonstrated the need to include all bodies in the world of fashion, to make it much more inclusive. Thus, this program has become the perfect tool to teach an important lesson to the fashion industry: that any person, whether thin, fat, tall or short, can have access to clothes.

“I don’t care what your size is, what race you are, what religion you come from, I want you to feel that you are represented here,” says the singer in the documentary.