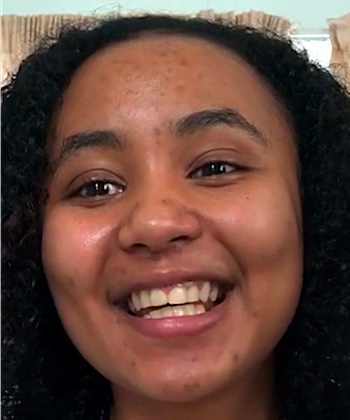 Hello, I am Ashleigh and I am from Swaziland and my goosebump moment is the day I went to go see Sam Smith Live in Concert for the very first time. It was 2019 and I remember I was so excited I just could not contain myself. And when we got to the venue, everyone was checking their tickets in a rush, like hurried because they wanted to be there by the time he performed. And I remember, everyone in there just seemed so excited. There were little kids, there were couples, there were old people. But everyone just had that same energy around them because we were all there to see Sam Smith and we were all very excited. I remember when the lights dimmed, and the smoke started, and he started humming the melody to “Dancing with a Stranger”, the crowd went wild, and it was just amazing. The atmosphere, the adrenaline rush, everyone just seemed so excited.

British singer and songwriter Sam Smith starred in epic moments for his fans during the concert he held in Johannesburg, South Africa in April 2019, as part of his world tour “The Thrill Of It All”. His romantic evening captivated and gave goosebumps to more than one, where his arrival in this country was expected by many.

The euphoria of the audience grew with the melody of “Dancing with a Stranger”. Accompanied by backing singers and instrumentalists, the four-time Grammy Award winner starred in a show that included songs in which he has collaborated with other artists. The concert was also attended by many celebrities.

‘The Thrill of It All’, Sam Smith’s second album

After the worldwide success achieved with his debut album ‘In the Lonely Hour’ in 2014 and having achieved four Grammy Awards, plus a Golden Globe and an Oscar for ‘The Writings on The Wall’ on the soundtrack of the James Bond film ‘Spectre’, Sam Smith presented his second album titled ‘The Thrill Of It All’ in 2017.

‘The Thrill of It All’ came after a massive social media buzz campaign from the British singer-songwriter and a hit first single, ‘Too Good at Goodbyes’ which is his biggest debut in the U.S. to date, entering the top 5 of Billboard’s Hot 100 chart and with which he reached the top spot in the UK and Australia.

‘One Last Song’ is the second single from the album. Smith said that this song was inspired by the person who made him write songs from his first album.

Things you probably did not know about Sam Smith

Before becoming a music icon in 2102, the British singer washed toilets and worked as a bartender in London. The album ‘In the lonley hour’ is inspired by his sad experience with a former love who broke his heart 3 years ago; but whom he credits with the fact that thanks to him, he began to write the music he wanted to sing.

His favorite color is navy blue, and he is not ashamed to confess that he has an obsessive-compulsive disorder. What is it? He says that before leaving home he double checks that he has turned off the faucets of the sink, shower, etc., to avoid a possible flood.

He calls his army of fans his ‘Little Sailors’ because of a song he wrote with the same name. Sam also confessed in an interview that he recorded one of his most famous songs, ‘I am not the Only One’ in a very raw state and that it is the only song on that album that is not based on his personal life; it is the story of a married couple he knew.

He loves cheese but can’t eat it because it damages his voice and red wine is his favorite, especially French wine. His first kiss was at the age of 14 and he is afraid of airplanes.