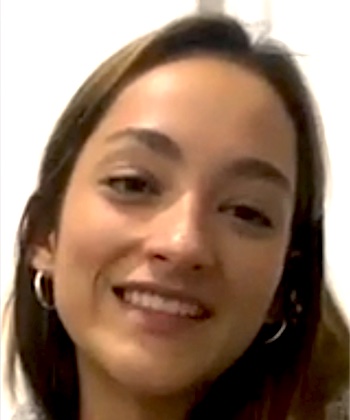 Taylor Swift's "All Too Well"

“Hello, my name is Susana, I come from Barbados, and my goosebump moment has to be when Taylor Swift dropped her 10-minute version of “All Too Well”. I loved that song so much, not only the reason why it was dropped but I loved the lyrics and the fact that while you hear it, you can feel a lot of emotions like love and hate and you can feel anger, and you can feel happy and sad. I think that is like the power that artists have, that they can describe something so perfectly and make it so beautiful and the fact that a lot of people, not only me, can relate to it. It is something really nice because you feel like you have a connection to those people as well, so yeah, that is my goosebump moment. I hope you listen to it.”

Taylor Swift released the re-recorded edition of her 2012 album, “Red”, which includes a ten-minute version of her hit single, “All Too Well”. It was long assumed that the song, considered one of the best examples of Swift’s songwriting prowess, is about her ex-boyfriend, Hollywood actor Jake Gyllenhaal.

However, the ten-minute version leaves no doubt that “All Too Well” was written after Swift and Gyllenhaal’s 2011 split. The couple dated for about three months starting in October 2010 and split shortly after Swift’s twenty-first birthday in December 2010.

The lyrics to this song include the lines, “And I was never good at telling jokes/But the joke goes, ‘I’ll get older, but your lovers are still my age’.”

The reason why Taylor Swift wrote “All Too Well”

It is well known that Taylor Swift’s main inspiration when creating her music is her own personal story. Specifically, her love relationships. Since the “Fearless” album she released in 2008, many of her songs were directed to love, and to the different people who had passed through her life in her early 19 years, such as Joe Jonas or Taylor Lautner. Now, at 31, she has re-recorded many of her greatest hits, including new lyrics that have revealed some of the details of her best-known relationships.

The first version of the song “All Too Well” was released in 2012, part of her fourth album, “Red”. It is a ballad that recounts her experience after the breakup with actor Jake Gyllenhaal in 2010, a relationship that lasted two months and did not go beyond January 2011.

Rumors about the breakup suggested that Gyllenhaal did not feel comfortable with the media attention they began to receive, nor with the age difference between the two – he was 29 and she was 21. Rumors that have now been confirmed by the new lyrics that the artist has added to her 10-minute extended version of the song: “You said if we had been closer in age, maybe it would have worked out / And that made me want to die,” sings the American, who says that this breakup was particularly hard for her. “They say all’s well that ends well, but I go through a new hell / Every time you cross my mind,” the lyrics read.

Speculation about the song is based on the story Swift tells in the song, which begins with a scarf she allegedly forgot at the home of Maggie Gyllenhaal, sister of her ex-partner, when “everything was fine”.

A reference for which she has been asked in numerous interviews since then, and that the actress has not come to deny. The song also recounts escapades and trips in which they coincided, although it is the issue of the scarf that sparked the rumors: “Now you’ve sent me my things and I come home alone / But you keep my old scarf since then / Because it reminds you of innocence and it still smells like me”.

“The Last Time” is another song from the same album that is supposedly dedicated to the actor, proving that even though the relationship was short, it marked a turning point in the singer’s love life. Taylor explained the story behind it, “It’s about the experience I had with a guy who wasn’t entirely trustworthy. I never knew when he was going to leave, or when he would come back, but he always came back,” she said. The song is about a woman’s promise to herself not to repeatedly listen to the same excuses.

Although at the time the age difference got in the way of the relationship, Gyllenhaal seems to have changed his mind over the years. The “Donnie Darko” and “Love and Other Drugs” star has been romantically linked since 2018 to 25-year-old French model Jeanne Cadieu, whom he outnumbers by 15 years in age.

Along with the extended version of “All Too Well,” Red’s re-recording includes six other unreleased songs and the release of a video. It was only a few months ago that Swift released the full re-recording of her “Fearless” album, following the sale of the rights to her songs without consent to investment fund Shamrock Holdings.

Record for one of the longest songs

Undoubtedly, “Red (Taylor’s Version)”, the second re-recorded album by the American singer and songwriter, has become a phenomenon since its release on November 12 of last year. Of the thirty songs that make up this new album, “All Too Well” (10-minute version) stands out, which has already set a record as the longest song on the Billboard charts.

Billboard Charts, from their official Twitter account, revealed that the new version of “All Too Well” (10 minutes and 13 seconds), is the longest number one song in the history of the Hot 100 charts. This is a historical fact in Taylor Swift’s career, as it has unseated the song “American Pie (Parts I and II)” (8 minutes and 37 seconds), by American composer Don McLean, which held the record for almost half a century, starting in January 1972.

More about hit single “All Too Well”: