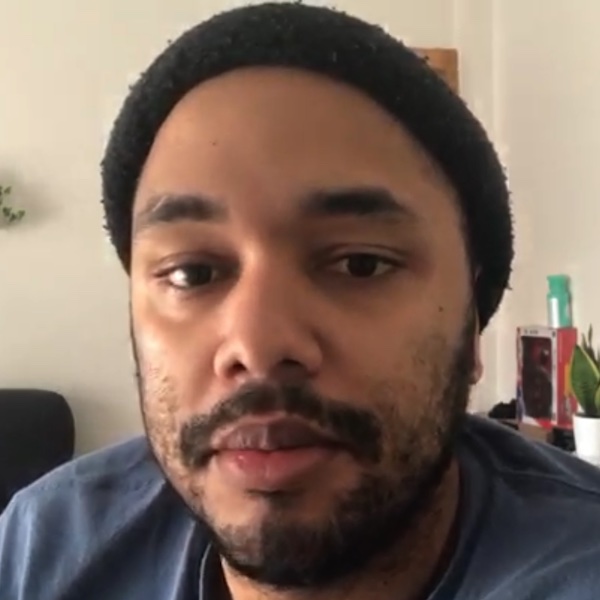 Fred: “Hey everyone, I’m Fred and I’m from Portugal. my goosebump moment is when I saw the Emicida show on YouTube when he made “the 10 years” of his songs. He made a dvd that he played on YouTube that’s called “10 years of triumph”. I don’t know how to explain it, when I saw it and every time I saw it I got Goosebumps because I feel so connected with it and it’s emotional for me because I’ve been following him for 10 years and we can see the evolution and everything. And you can still feel the emotion through the screen. So for me it was as if I was there. And if you are black, you feel more connected with it because he empowers us with his lyrics, his songs and everything. I just think it’s amazing.”

A repertoire that gives us Goosebumps is the “10 years of Triumph” that rapper Emicida recorded to celebrate ten years of artistic career.

This album, recorded live on November 20, 2017, Black Awareness Day, in a show at Casa Audio, in the city of São Paulo (SP), is a tour of his entire discography, from the first mixtape “For those who already bit a dog for food, until I got far” to more recent hits like “Bang”, “Passarinhos”, “Chapa é HOT”, among others. In total, this DVD has a setlist of 27 songs, 13 guests and a tribute to the rapper’s greatest hits that does not leave his fans indifferent.

Emicida, who was born in São Paulo, Brazil, in 1985, is the stage name of Leandro Roque de Oliveira, a Brazilian rapper and music producer, who is known for his improvised rhymes and who has become one of the most powerful voices against racism in his country.

He made his first appearances in 2005, when he participated in the battle challenge. However, his career began in 2008, with the recording of the single “Triunfo”, which sold 700 copies in one month.

His name “Emicida” is the fusion of MC and homicide, because his friends called him a murderer because he killed all the opponents with his rhymes.

His debut work was released in 2009, a mixtape with 25 tracks, which brings together all his compositions, entitled “For those who already bit a dog for food until I arrived soon”.

He worked as a reporter on the television shows “Manos e Minas” on TV Cultura and on “Sangue B” on MTV. In 2013, he released the studio album titled “Glorious Return of Who Never Was Here”.

In 2009, Emicida was nominated at VMB, where he competed in “Best Rap Group / Artist”, “Aposta MTV” and “Videoclipe do Ano”, with the song “Triunfo”.

In 2011, he was also the first Brazilian rapper to perform at the Californian Coachella festival. Afterwards he was invited to Rock In Rio, London’s Back2Black, Montreux jazz Festival in Switzerland, and again nominated for Video Music Brazil, competing in three categories: “Hit of the year”, “Clip” and “Artist of the year”. Emicida won “Clip of the Year”, with “So Toma”, and “Artist of the Year”.

The rapper was also awarded the Latin Grammy in the category Best Rock Album or Alternative Music in the Portuguese language, with his album “AmarElo”. In it he fuses intense lyrics, social denunciations and messages of improvement and hope.

He also recorded a video clip with the soccer star, Neymar; he recorded for video games and was elected as ambassador for the FIFA 15 game with the song “Levanta e Anda”.

In 2020, the musician also premiered his homonymous documentary “AmarElo – É Tudo Pra Ontem”, through Netflix, in which the message is clear: “Racism is going to die screaming”.

The work was released at a time when the debate on racism returned to light after the brutal murders of the welder Alberto de Freitas and the street artist NegoVila, days later in Brazil.

With a powerful narrative, “AmarElo – É Tudo Pra Ontem” traces the history of Brazil through the black legacy, starting from three emblematic moments: the Modern Art Week of 1922, the founding of the Unified Black Movement in 1978, in full military dictatorship, and the AmarElo show, from last year, when hip hop street culture entered the iconic Theatro Municipal de Sao Paulo.

The documentary is a testimony to the struggle and social conquests of the Brazilian black population, based on music.