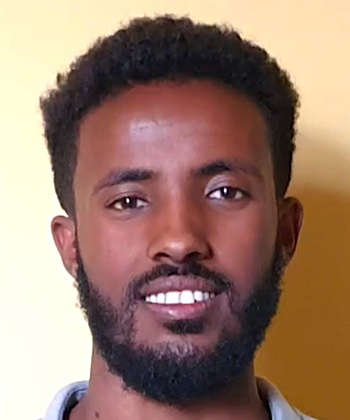 “Hello! My name is Ermias Alemayehu, and I am from Ethiopia. My goosebump moment was when I listened to J. Cole’s song called “Love yourz” for the first time. The song was released a couple of years ago, but I heard it recently. J.Cole is my favorite rapper. His music talks to my soul. This song especially gives me hope and inspires me to follow my dream during my hardest time. The song is about fantasizing about other people’s lives by forgetting that the thing that seems little but matters a lot which is family, caring and love. This music is very educational and the most heart-touching song I have ever seen. Since then, when I come across the song, it made me realize in life even if you get everything, you won’t be happy until you love what you have.”

In “Love Yourz”, J. Cole talks about how we have been programmed to chase happiness by going after things that don’t really make us happier. In this song the rapper reflects from his personal experience that the most important things in life are love and happiness. He realizes that money and fame did not give him the happiness he desired. To achieve true happiness, he needed to appreciate himself and those who love him.

Lastly, J. Cole talks about how to accept himself, despite of growing up with a difficult lifestyle. “Love Yourz” is one of the songs that many of his fans can relate to because the lyrics show that no matter how messy your life is, you must learn to love the one you have.

The song is, in many ways, the pinnacle that appeals to Cole’s most devoted fans because the rapper is sincere, shares both his wisdom and his confusion and, perhaps most importantly, gives the listener a reason to keep going, no matter the situation.

The legacy of J. Cole

Jermaine Lamarr Cole, better known by his stage name J. Cole, is an American rap, hip hop and R&B rapper and music producer who was born at the United States Army General Base Hospital in Frankfurt, Germany, on January 28, 1985, to a European-American mother and an African American father. When he was eight months old, he and his mother moved to Fayetteville, North Carolina, USA.

Cole became known in 2007 after the release of his first mixtape “The Come Up”. Shortly after that, Cole signed a contract with Roc Nation, Jay-Z’s record label, becoming the first artist to do so. It was then that Cole released his first studio album, “Cole World: The Sideline Story,” in 2011.

It debuted at number one on the U.S. Billboard 200 and was soon certified platinum by the Recording Industry Association of America (RIAA). His next two releases, “Born Sinner” in 2013 and “Forest Hills Drive 2014” in 2014, received positive reviews, and both were certified platinum in the United States. The latter earned him his first Grammy Award nomination for Best Rap Album of 2014. In December 2016, Cole released his fourth studio album “4 Your Eyez Only”. The album debuted at number one on the Billboard 200 chart and was certified platinum in April 2017.

A self-taught piano player, Cole also works as a producer alongside his rap career, handling most of the production on his own projects, in addition to having produced singles for artists such as Kendrick Lamar or Janet Jackson. He has also developed other projects, such as Dreamville Records, a record label created by Cole in 2009, as well as the non-profit Dreamville Foundation.

The Rap and Hip-Hop Therapist

As a reflective and contemplative rapper, J. Cole generally stays away from battling with other artists or living a flashy, headline-grabbing lifestyle. He runs the Dreamville Records label with his former St. John’s College classmate, Ibrahim Hamad, releasing music from up-and-coming artists like Omen, Bas and Cozz.

The label shares a name with his Dreamville Foundation, a nonprofit Cole established in his hometown, which was created to bridge the gap between the worlds of opportunity and Fayetteville’s urban youth. He also runs several events and programs, including a book club and essay contests.

Cole is married to Melissa Heholt, with whom he has a son. He recently purchased his childhood home, after which he named his “2014 Forest Hills Drive” album, with the intention of turning it into free temporary housing for single mothers.

Actions like this have made him a rapper that even presidents can praise. Cole was invited to the White House to meet with Barack Obama in the spring of 2016 and rapped the song “High for Hours.”