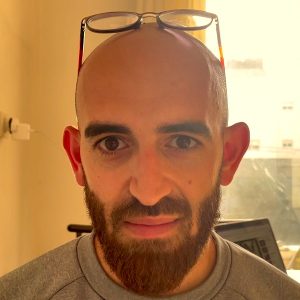 Saad: “My GoosebumpMoment is when I first heard the song by Daft Punk called “Giorgio by Moroder”. There is this specific part of the song that I still remember from the very first time I heard the song, I had Goosebumps all over my body. There is this one specific part in the song that says “My name is Giovanni Giorgio, but everybody calls me Giorgio”, and then the beat goes on and the song continues. Each time I hear this part of the song, I have those Goosebumps all over my body and those feelings and emotions. The fact that this song was written and composed by a great Italian composer Giovanni Giorgio, he is explaining his story in the song, from the 60’s with music in Berlin and how he achieved his dreams really makes me feel those Goosebumps each time I listen to the song”.

An interview turned into a song

“Giorgio by Moroder” is the third song from Daft Punk’s album “Random Access Memories”. The song includes a monologue recorded by Italian artist Giorgio Moroder in which he talks about his youth and his musical career. The song, which lasts 9 minutes, was positioned between the French and Swedish charts thanks to the digital downloads of the album.

When the French duo presented the idea to Moroder, they presented it as a kind of interview turned into a documentary-song. Although Moroder was not related to the melody, he considers that the music is inspired by “I feel love”, a collaboration with Dona Summer from 1977. This honest lyric of his career gives his fans Goosebumps.

What came after “Giorgio by Moroder”?

Giorgio Moroder says that the one who convinced him to participate in this song in 2013 was his son, who was a passionate fan of the work of Guy-Manuel de Homem-Christo and Thomas Bangalter, members of Daft Punk. But what caught his attention the most was that the French only asked him to tell them his story. That was the beginning of “Giorgio By Moroder”.

This song raised a sleeping giant. After its success, the biggest names in pop wanted to work with him once more. The result was “Déjà Vu”, an album released in 2015 in which singers such as Sia, Britney Spears, Mikky Ekko and Charli XCX and Kylie Minogue collaborated with him and in which he explores the scope of EDM. He creates a party album full of color and energy that is perfectly condensed on the album “74 Are The New 24”.

This record and its momentum motivated him to return to his roots as a DJ and at 79 years old he went on a European tour in 2019 as a DJ. Today he is almost 81 years old and is still ready to continue playing music at parties as soon as the pandemic allows it.

Giorgio Moroder, considered one of the architects of electronic music as we know it today, was also the one who gave the impetus that disco music needed to fully explode. He also laid the foundations for dance, techno and EDM.

Known for his thick mustache and good character, this Italian producer was the first to pick up a Moog synthesizer and take it to the dance floor.

Giovanni Giorgio Moroder was born on April 26, 1940 in a small northern Italian town called Ortisei, which is culturally more German than Italian. As the producer himself explains in the song “Giorgio By Moroder”, he always dreamed of being a musician and at the age of 15 he started playing the guitar.

Following that dream, he moved to Germany where he started as a Dj at Scotch Club, located in the city of Aachen, which was the first nightclub in the country. Little by little he discovered not only the secrets of music, but what drives bodies to move wildly under the mirror ball.

In the late 1960s he moved to Munich and there began his rise to glory. At that time, the city was heavily influenced by African-American music from the 1950s and 1960s.

Moroder began to establish himself in the music industry with songs like “Son Of My Father” or “Looky Looky”, but he was still not satisfied. The idea of creating something that sounds futuristic, new and never heard before was growing inside him.

In those back and forth times he met an American showgirl named Donna Summer, who was the missing piece of the puzzle. With the incredible voice of Summer and with a Moog synthesizer, in 1977 he released “I Feel Love”, a song that changed music forever.

He also brought his talent to the movies and started making soundtracks. His most iconic works were the songs “The Chase” from Midnight Express, “Flashdance … What a Feeling”, from Flashdance and Top Gun’s “Take My Breath Away,” which were all awarded an Oscar for Best Original Song in their respective years.

Apart from all that, he composed the anthem of several Olympics and “Un Estate Italiana”, probably the best song of a Soccer World Cup ever made.

After achieving countless successes and working with the best artists in the world, in ’93 Moroder retired and dedicated himself to his family and to golf.

Daft Punk: Who are the French hiding under their helmets

Daft Punk is a producer duo made up of French musicians Guy-Manuel de Homem-Christo (born 1974) and Thomas Bangalter (born 1975). Daft Punk achieved great popularity in the house style in the late 1990s in France and continued its success in the following years, using the synthpop style. The duo is also credited for producing songs that are considered essential in the French house style. From 1996 to 2008 their representative was Pedro Winter (Busy P), the head of Ed Banger Records.

The acronym “Daft”, present in its first DVD, comes from the initials of “A Story about Dogs, Androids, Firemen and Tomatoes”. These words are given meaning to the musical duo for their first song “Da Funk” from the year 1995, belonging to the album “Homework”, where an anthropomorphic dog appears as the protagonist in the video. Then “Androids”, for the appearance of dancing robots in the 1997 “Around the World” video from the “Homework” album. “Fireman” (Firemen; in Spanish) featured in the “Burnin” video and “Tomatoes” for the “Revolution 909” video.

Early in the group’s career, the band members were influenced by bands like The Beach Boys and The Rolling Stones. Bangalter and de Homem-Christo were originally in a band called Darlin ‘, which disbanded after a short period of time, allowing the two to experiment with music on their own.

The duo became Daft Punk, and they released their acclaimed debut album “Homework” in 1997. The second album “Discovery”, released in 2001, was even more successful, fuelled by the singles “One More Time,” “Digital Love,” and “Harder.” Better, Faster, Stronger. In March 2005, the duo released the album “Human After All”, receiving mixed reviews.

However, “Robot Rock” and “Technologic” were successful in the UK. Daft Punk toured throughout 2006 and 2007 and released their live album “Alive 2007”, which won a Grammy for Best Electronic / Dance Album. The duo composed the music for the film “Tron: Legacy” and in 2010 released the soundtrack album for the film.

Daft Punk is known for their elaborate concerts that incorporate visual effects, for the emphasis they place on the story and the visual components in their musical productions. Also because since 2001 in their performances or public appearances they appear disguised as robots. They very rarely give interviews or appear on television.

After nearly three decades of success, Daft Punk announced their separation this year in an eight-minute YouTube video titled “Epilogue”.