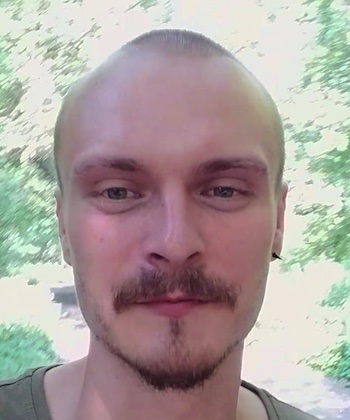 Karlis: “Hi! I come from Latvia, and my ultimate goosebump moment is a live concert. So, for this one, I was not ready at all. I am the kind of a guy who just goes through the most popular songs from a band and does not go through the discography, so I did not know this one. So, when the orchestra started playing for about two minutes, I already had chills down my spine, and there is just something about metal bands collaborating with orchestras. I thought it would be a calm song, but I was wrong. So, then, the tune changed, Ollie started singing, and I was thinking: “OK, so he’s singing pretty calmly, this will be one of those toned-down songs, just to help you calm down and tone down the emotions.” But then everything went quiet for a second, and, just like that *snaps*. Explosion! Throughout the whole chorus, I do not think I took a single breath. I was just awestruck with emotion, and I just could not move, literally, I just stood there. So, after that, everything went silent again, and I just stood there. So, the song continued, and by the time the second chorus was there, everyone was singing. The back vocalists, everyone was singing, and the orchestra was playing in the background. By the end of the song, I just could not shrug the goosebumps off, and, I think, at the end of the song, the crowd cheering was not just cheering for the performance, but they were cheering and just screaming to get out all the emotions they had just witnessed. After that, I realised that after a moment like that, I would experience feeling as light as a feather for weeks to come. That is my ultimate goosebump moment.”

Classical music has always been a musical genre that has been associated with elegance and education. While for many people unfamiliar with metal, the latter means the opposite. In fact, to think that there have been many metal bands that have had the privilege of playing with a symphony orchestra and choir, creating a hybrid of both genres, is to be literally left open-mouthed.

It is well known that if Bach or Beethoven were alive today, they would be masters of heavy metal. The fact is that the relationship between classical music and metal is closer than we think.

Leet’s talk about the aesthetic, musical and thematic aspects of the composition. In the aesthetic aspect, the musicians of the heavy metal genre seek to emulate the characters that founded a certain part of their style, at the same time giving it the personal mark of the style. This can be seen in their shirts with ruffled collars and their elasticized pants, typical of the classic composers.

Also the black color, characteristic of the sobriety of the classical authors and composers of the eighteenth century, is present to a large extent in contemporary brass musicians. On the other hand, in the graphic part of the metal bands’ discs we see a great part of them marked to recall or portray epic battles, fantastic creatures or classic scenes of the Middle Ages.

The virtuosity of the practice of the instrument and the perfect interpretation of the work are two fundamental aspects to consider when analyzing both styles. But the great common point that both share is the Fugue. This is a work that is usually performed by a single person and is played in several simultaneous keys. This is typical of classical music and metal music. With the difference that in classical music this type of concert can be performed by the piano, as in the case of Bach, or by violin with Vivaldi, and you might even find the harp in a concert of this type.

But in the case of metal this concert modality is only limited to the electric guitar, since it preserves the characteristics of classical music in its melodies and scales, at the same time a highly metal sound. In the thematic of the music, we could say that they are united by their opposites, since classical music seeks to transmit a cheerful and hopeful sound and, on the contrary, metal finds its center in an aggressive and shocking sound to the ear, using notes in minor tones and the melodies are endowed with a dark and tenebrous dye.

If we talk about groups that are considered the fathers of Heavy Metal, we always remember three basic ones: Black Sabbath, Led Zeppelin and Deep Purple. In the latter, there was a guitarist, who might be the most influential in rock music, called Ritchie Blackmore, who used a guitar playing technique based on arpeggios, scales and fast developments, influenced by classical music composers, such as Bach, Vivaldi or Paganini.

This technique, later used by people as renowned as Yngwie Malmsteen, came to be called Neoclassical Metal, which spread and influenced hundreds of guitarists, especially Heavy-Power Metal bands. The great Timo Tolkki or the leader of Rata Blanca, Walter Giardino, are two of his most relevant “disciples”.

From Ritchie Blackmore’s influence, rock and Heavy Metal always had that symphonic component, which has served to enrich and improve their sound. Bands like Stratovarius, Nightwish or the Italians Rhapsody, are just some examples of bands strongly influenced by classical music and Neoclassical Metal.

On the other hand, bands like Metallica, Motorhead or AC/DC do not have much to do with this sound, although as you will see below, some of them are in the list of the 25 best Heavy Rock Feat. collaborations.

Heavy metal is a musical genre that incorporates elements inspired by blues rock, rock and roll, 60s acid rock and classical music, along with hard rock, with which it shares essential traits. The origin of heavy metal dates to the late 1960s, driven by some groups of the time, which were incorporating more powerful and distorted sounds.

Heavy metal gained popularity in the UK, Europe and the USA in the early 1970s, and had its great resurgence with the movement called the New Wave of British Heavy Metal (or Heavy metal in general is characterized by powerful, raw and “aggressive” rhythms, achieved using distorted guitars and with power in the bass and drums. Along with this, sometimes melodic passages, however, it is the greater power in the sound that is one of the general characteristics that most differentiates it from other genres.