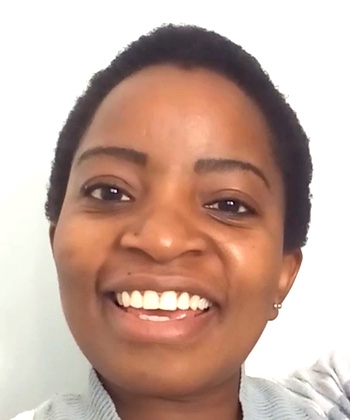 Hazvi: “Hi. I am from Zimbabwe. I am really excited to share with you my goosebump moment. My goosebump moment was when I listened to Whitney Houston’s song “I didn’t know my own strength”. When I listened to the song, I was going through a moment where I had hit a writer’s block. I just could not have the creativity flowing of content ideas and everything. When I heard this song, it just flipped a switch in me, and I was just accelerating with ideas popping up wherever I went. Ideas kept on rejuvenating. This song “I didn’t know my own strength” crushed down by circumstances and by things, I still managed to find my own strength and I was so happy. I hope this motivates you.”

There is no doubt about the legacy Whitney Houston displayed during her lifetime. She defined the voice and simplicity of the heart. One of her last songs, “I Didn’t Know My Own Strength”, is one of those beautiful gems that paid off. When you hear the song for the first time, it feels most beautiful and sincerely majestic.

“I Didn’t Know My Own Strength” is a very soulful gospel influenced pop/soul ballad where we can appreciate that Whitney’s vocal skills remained. It may not reach the high notes of songs like “I Will Always Love You” or “Greatest Love of All”, but at least we have the opportunity to hear the singer again and in a very dignified way.

All about the song “I didn’t know my own strength”

“I Didn’t Know My Own Strength” was written by award-winning writer Diane Warren and produced by David Foster. The song was originally supposed to precede the album’s UK release on August 31, 2009 and US release on September 1, 2009 but was cancelled in favour of “I Look to You” and “Million Dollar Bill”. The song was released on November 6, 2009 as a promotional single.

After a 7-year absence from the music world, one of the great divas of R&B and pop returned in a big way with “I Didn’t Know My Own Strength” and her first studio album since “Just Whitney”, which received lukewarm reception on the charts and mediocre reviews from music pundits. After suffering some tough personal times and drug problems, Whitney Houston’s image was badly damaged for years, but the “I Have Nothing” singer returned to the music scene with a healthier and more serene image, proving that she had recovered from everything that kept her away from the top of the music world.

“I didn’t know my own strength” was a great challenge for the singer, who had not appeared in the charts for years. During her absence, new pop and R&B divas had consolidated and other new ones had appeared, endangering her hegemony. But age and experience are a degree, and above all Whitney’s great voice, which may not be the same as it was years ago, was still a pleasure to listen to.

The album “I Look to You”

The album is composed mainly of pop/R&B half-times, soul/gospel influenced ballads and several up-tempo tracks. Standout tracks on the album include “Nothing But Love”, produced by Danja, which features a great electronic component and is one of the most up-tempo tracks on the album, the great ballad “I Didn’t Know My Own Strength”, the only track composed by Whitney on the album together with the great songwriter Diane Warren and reminiscent of the singer’s classic ballads, the pop/R&B mid-tempo “Call You Tonight”, and the fantastic “I Got You”, a mid-tempo R&B ballad produced by singer Akon, which is also my favourite track on the album.

“I Look To You” debuted at #1 on the American album chart with over 300 thousand copies sold in its first week (the highest sales figure of Whitney’s entire career) and also managed to reach the top in countries such as Germany, Italy and Canada.

In general, “I Look To You” received good reviews from music experts, who were delighted with the singer’s comeback and praised the album’s production and content, although they noted that Whitney’s voice had lost its power and no longer reached the high notes of the past.

Whitney’s voice reached the top. When she sang, our emotions would rise and then fall thanks to her projection. Her articulation of words combined with the smoothness in her timbre gave rise to one of the greatest voices of all time.

She lent her image to the anti-apartheid movement, collaborated in actions against AIDS and promoted more opportunities for young black men and women to access education programs. But no matter what she did, people always wanted more of her, as is the case with all stars. The public’s demand for its stars is unrelenting.

Whitney Houston’s musical legacy will always be an inspiration to young artists. Without leaving aside any aspect of her amazing talent and having expressed my total and complete admiration for her career, I hope that her stormy life in the spotlight will also serve as an example.

More about the song “I didn’t know my own strength”: