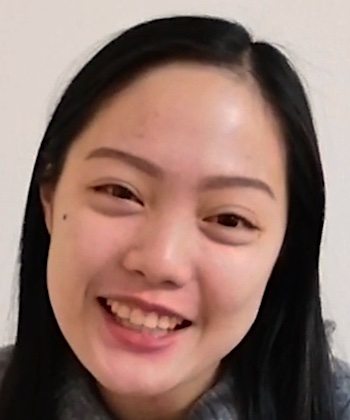 Charmaine: ”Hi! I’m Charmaine from the Philippines, but I currently live in Japan. My GoosebumpMoment is when I hear the song ”Paubaya” which is performed by Ms. Moira dela Torre. This is a song about a couple whose relationship had ended because the girl loves another man. That’s why the title of the song becomes ”paubaya” which literally means ”letting go”. Just the song itself or the lyrics themselves make me cry because it’s relatable and the angelic voice of the singer makes me more emotional. This singer is one of a kind. She’s really so amazing that she has this power that whenever she sings, whatever the song may be, it makes my heart melt and I happen to cry unconsciously. And also watching the official music video touched my heart, no it made my heart broken. Not only me, but a lot of people. My favorite line of the song is ”I won’t insist anymore if you’re happy with him but I just want him to take care of you and love you”. It may sound cliché, but it’s really true that if you truly love a person, you have to set him free, even if it hurts. So, if you happen not to know this song or you have not watched the video yet, I recommend you to watch it but make sure to bring a tissue with you. That’s it. Bye! Thank you”.
(<<)

The feeling of having strong emotions for someone and discovering that this person doesn’t feel the same for us is an experience that can make us feel pain and grief. This is the message that the new song “Paubaya” by Moira Dela Torre leaves us with and it gives us Goosebumps.

This song, which was released on Valentine’s Day, crushed the hearts of millions of Pinoy fans. The song itself is about accepting that an ex-partner has found happiness with another person and just like the meaning of its name “Paubaya”, the song highlights the importance of forgiving, letting go and letting go of these feelings.

The story behind the video for “Paubaya”

The video for this song stars the actors and ex-partners Joshua García and Julia Barretto, whose relationship in real life ended in 2019. However, it is observed that six of the eleven minutes that the music video lasts were dedicated to a scene of “closure” in their relationship that is undoubtedly raw and heartbreaking, and for which the dialogue was co-written by both of them.

Their breakup was one of the most talked about in 2019. Around that time, a rumour spread that Julia was linked to the protagonist of “Between Maybes”, Gerald Anderson. However, they both denied it.

In the emotional music video, Julia and Joshua play characters that are presumably fictional versions of themselves. After Julia leaves Joshua at the altar, they return to the church, apologizing and forgiving each other for their shortcomings.

Many fans applauded the actors’ willingness to expose their raw feelings. Although the scenes of the actors in the video can be interpreted as a closure for the ex-lovers, for Moira Dela Torre, “Paubaya” is actually the final chapter of her album “Patawad”.

In just 24 hours after being released, the music video for “Paubaya”, directed by Niq Ablao, registered more than 7 million views.

Before releasing this song, Dela Torre released three other heartbreaking songs, whose stories precede the one told in “Paubaya”. The first is “Patawad, Paalam” with “I Belong to the Zoo”, followed by “Paalam” with “Ben & Ben”, and her song “Patawad”.

Why were Joshua García and Julia Barretto chosen for the video?

Moira Dela Torre and her husband Jason Hernandez, who is a collaborator in most of her music, confessed that they always had Joshua García and Julia Barretto in mind to convey the crude message of “Paubaya” because of their history as a couple.

The singer said that just because two people didn’t end up together, it doesn’t mean that it was a failed relationship.

Regarding the release of this song on Valentine’s Day, Moira said that it is simply because it is the day of love and that although many of us think that love is to stay together for life, many times it frees us.

Who is Moira Dela Torre?

Dela Torre’s career began as a voice artist who worked on corporate jingles and songs, including McDonald’s “Hooray for Today” and Surf’s “Pinalaki”.

In February 2018, her first “Tagpuan” concert was sold out in four days on its first day. Because of public demand, the concert had a second night. That year, she became the number one most streamed artist on Spotify in the Philippines.

In 2019, she became one of the judges on Idol Philippines, and she performed her second major concert at the Araneta Coliseum titled “Braver”.