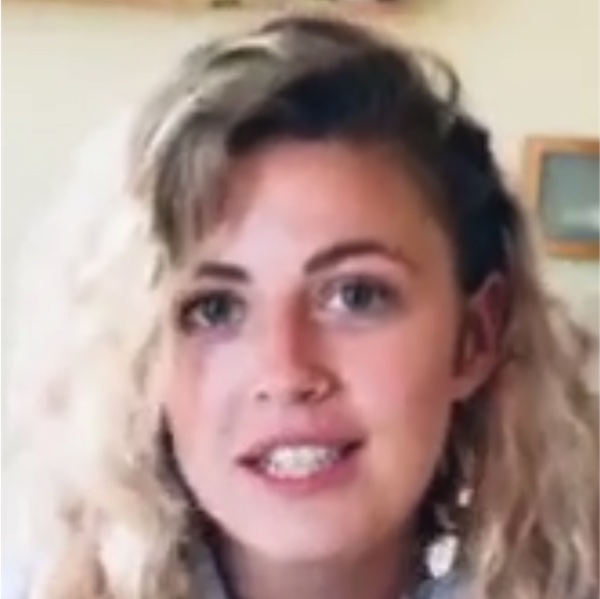 Kirsten: “Hi guys! I’m Kirsten, I’m from Scotland and my GoosebumpMoment is when I listen to the lyrics of the Bob Dylan song “Boots of Spanish Leather”. Bob Dylan in general is my favourite artist. I think his lyrics are completely in a league of their own but this song is extra special to me. The reason why it’s a GoosebumpMoment – it’s actually a really sad song. It’s like a conversation between two people. One of them is leaving, they’re going away to a different country and they’re asking their loved one “is there something I can send to you to help you remember me?” and the other person just says “I just want you to come back safely to me one day” and it’s really sad. And the reason it’s so special for me is because I’ve lived away from my family for about six years now so it always makes me think of them and it’s sort of a ritual of mine that every time I’m leaving, it’s always the song I listen to as my plane takes off and I get Goosebumps every single time. So that’s my GoosebumpMoment, thanks for listening and I can’t wait to hear yours.”

“Boots of Spanish Leather”, a song written by American singer Bob Dylan and published on his 1964 album “The Times They Are A-Changin”, is one of the artist’s most seductive, romantic and poetic ballads.

The song deals with the breakup of the singer-songwriter with Suze Rotolo, the girl on the cover of the mythical album “The Freewheelin” and is a tremendously personal composition of the great American poet where he opened his heart to leave us one of the most sincere love songs in the history of folk. Who has not felt like the protagonist of history at some point in time?

Suze Rotolo was Bob Dylan’s partner from 1961 to 1964. This courtship inspired titles of the singer-songwriter such as “Don’t Think Twice, It’s All Right”, “Boots of Spanish Leather” or “Tomorrow Is a Long Time”, which Dylan wrote while Rotolo was studying art at the Italian University of Perugia.

Rotolo also became known for having starred in one of Bob Dylan’s most famous covers, “The Freewheelin”, in which the two appear walking embraced down one of the streets of the SoHo neighborhood in New York.
The couple met at a concert the singer-songwriter gave at the Riverside church in New York in 1961, when Rotolo was just 17 years old and Dylan three years older than her.

The daughter of an Italian family with communist ideals, her support for the civil rights movement and her work for the Congress for Racial Equality had a great influence on Dylan’s songs.

The life of Bob Dylan

Robert Allen Zimmerman, better known as Bob Dylan, was born in Duluth, Minnesota, on May 24, 1941.
Dylan grew up in a mining town called Hibbing. There his father was a partner in a furniture and appliance store that bore his surname.

At just 14 years old, the young Zimmerman got his first guitar and influenced by the music of Little Richard, Elvis Presley and Johny Ray, he was part of different rock and roll bands while he was studying at the institute, and in honour of the poet Dylan Thomas, took his name as an artistic nickname.

In 1961, he dropped out of college and moved to New York. There, where he practically arrived with what he was wearing, he continued to play in venues and create a small community of followers. In his nights performing in bars in New York he came into contact with the generation of “Beat” poets, which marked his literary desire.

Little more than half a century later, the Swedish Academy awarded him the Nobel Prize for literature, an award that had never before been given to a musician, for “having created a new poetic expression within the great American tradition of song”.

Curiosities around a myth

Between Zimmerman and Dylan, the performer used other stage names. For example, while he played piano for Bobby Vee, before his career took off, he called himself Elston Gunn. He also responded to the names of Blind Boy Grunt, Robert Milwood Thomas or Boo Wilbury.

In May 1963 Dylan had closed a performance on the famous television show “The Ed Sullivan Show”. The singer was to perform “Talkin’ John Birch Paranoid Blues”, a deeply political song, which both producer and host had approved of.

However, during rehearsal, the same day of the broadcast, an executive of the network asked to change the repertoire and Dylan left the place.

As a singer-songwriter, he became a Christian in 1979 and, according to Rolling Stone magazine, his transition to this faith was so intense that he quoted the gospel every night from the stage.