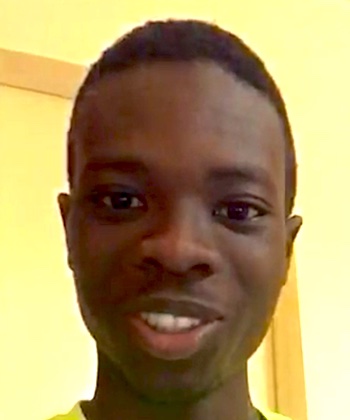 “All of me” by John Legend

“Hello, my name is Samuel and I come from Benin. My goosebump moment is every time when I play “All of me” by John Legend. This song shows sincerity and reflects love. The piano song is so soft, and the music is so tender that you could listen to it over and over again every day with your partner. I think John Legend has done a good job of valuing love through his song. If you are also looking for a morning dedication song for your partner, please try this song. The world’s a family! Thank you so much”.

The world’s anthem of love

“All of Me” is the best-known song of the consecrated singer John Legend and the one that topped the famous Billboard Hot 100 chart for three weeks in a row. It became a musical hit in 2013 and the world’s anthem of love. A beautiful and very deep song to dedicate to the person you love.

This song, one of the singles from his fourth studio album “Love in the Future”, is a piano ballad, inspired by his then fiancée Chrissy Teigen. The couple met in 2007 on set while filming for the video of “Stereo”. September 14, 2013 was the date they tied the knot. The song was performed by Legend at the 2014 Grammy Awards ceremony.

The video was shot in Italy just a few days before the wedding between Legend and Chrissy Teigen. In it, it shows various love situations of the couple interspersed with images of Legend performing the song and playing the piano. The video concludes with scenes from their royal wedding at Lake Como, Italy. It was directed by Nabil Elderkin, filmed entirely in black and white except for images of the wedding that appear towards the end.

What is behind John Legend’s “All of me”?

“All of me” is a song with heartbreaking and deep lyrics. A madness of love that envelops us as the artist embraces his girl with unbridled passion. “Because all of me loves all of you” sings John Legend in the chorus. One of the most romantic messages in “All of me”, not suitable for sensitive hearts or those in the process of breaking up.

John Legend wrote this ballad with Toby Gad and produced it with David Tozer. “All of me” is dedicated to his wife, model Chrissy Teigen, with whom he has been deeply in love since they met in 2006.

As it could not be otherwise, “All of me” has a video of the most sensual with an elegant aesthetic, shot in black and white, catches and bristles the skin.

John Roger Stephens, known artistically as John Legend, is a singer, pianist, composer and actor who was born on December 28, 1978 in Springfield, Ohio, United States. Before the release of his debut album, John Legend collaborated with established artists.

This artist has a career full of works, authentic songs and collaborations that have positioned him as one of the indispensable figures of African American music today. He is the winner of more than 10 Grammy Awards among many other awards.

He currently has 5 albums on the market: the first one he released in 2004 and the last one in 2016; however, the 2013 album is one of the most acclaimed by his audience, where the emblematic song “All of me” is contained.

John began learning piano at the age of five and reflects a true talent for this instrument. He composed his first title in adolescence, when he made his first steps in the professional world of music. Quickly noticed for his voice, he was hired as a singer on tours of Lauryn Hill and Alicia Keys and collaborated with Janet Jackson, Mary J. Blige, Jay-Z, Black Eyed Peas, and more.

By the late 1990s, John began performing a series of shows in Philadelphia, eventually expanding his audience base to New York, Boston, Atlanta and Washington, DC. He graduated from college in 1999 and thereafter began producing, writing, and recording his own music.

He released two albums independently; subsequently, he started working on his demo and began submitting his work to various record labels. He ended up releasing it in 2000 and Live at Jimmy’s Uptown from 2001, which he sold out at his shows. After graduating from the University of Pennsylvania, Legend began working as a management consultant for Boston Consulting Group.