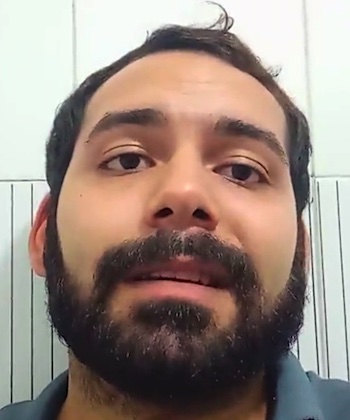 “Hi everyone, my name is Daniel. I am from Aruba. I want to tell you about my goosebump moment. It was about five years ago. I was in a singing competition and I was performing and singing “Livin’ la vida loca” by Ricky Martin on stage in front of about two hundred people. I was always shy and when I started singing shirtless the audience went crazy and started applauding me. And honestly, I never thought I would do it because I was a really shy person, but when I did it I felt unstoppable, invincible and every time I remember that I felt this way. So that is it. Thank you!”

“Livin’ la vida loca” is a single released by Puerto Rican-American singer Ricky Martin, included in his fifth studio album and his debut album in English titled “Ricky Martin” (1999). The song was composed by Desmond Child and Robi Draco Rosa, with Spanish lyrics by Luis Gómez-Escolar, and reached the top of the charts during 1999. The song earned several Grammy Award nominations and helped Ricky Martin gain enormous success in the United States and around the world. It is Martin’s signature song.

The song is generally accepted as the song that started the Latin pop explosion in 1999 and made the acceptance of other Latin artists, first with Jennifer Lopez, Chayanne and Enrique Iglesias, and later Shakira, Thalia, and Diego Torres easier to reach the English speaking market. Prior to this occasion, many non-Latinos had never heard of Ricky Martin until CNN reported on his unstoppable performance of “La copa de la vida” at the 1999 Grammy Awards show, which became a catalyst in bringing Latin pop to the forefront of the U.S. music scene.

One of Latin America’s idols

Ricky Martin is more than just a Puerto Rican, the talented singer and actor has been captivating people for decades for his charisma and attitude on and off stage, and for being a spokesperson for the LGBTQ+ cause in Latin America.

His gallant demeanor and his latent humility have made that since his beginnings in the music scene young people take him as a source of inspiration and adults as a Latin American leader, who with his music, in addition to teaching us to move our hips to replicate his steps, has put the rhythm in the music scene in the region to push for the excellence. It is not for nothing that he is recognized as the King of Latin Pop.

Born in San Juan, Puerto Rico, Ricky Martin has an impactful musical career, making him one of the best-selling and most influential Latin artists in history. His career, which began in the 1980s with the youth group Menudo and continued as a solo artist in 1991, has compiled nine studio albums as of 2021, reaching 60 million in sales and catapulting him from Latin pop to English-language pop.

The winner of two Grammy Awards and five Latin Grammys, Martin has a career worth admiring. His beginnings as a model gave way to performances on the small screen, along with Menudo, with teen soap operas such as “Por siempre amigos” (1986), to later embark on his solo adventure at the age of 19.

His first album titled under his artistic name catapulted the Puerto Rican to the top of the music charts with his hits “Vuelo” and “Fuego contra fuego”. It is with this same album that he obtained eight gold records throughout Latin America and the United States.

Such was the impact and sensation in the nineties with this figure, after albums such as “Me amarás” (1993) or Vuelve (1997), that by 1998 Ricky Martin would reach the top of the world music scene with “La copa de la vida”. It was the official theme of the FIFA World Cup France 1998, which occupied the first place in the charts of more than thirty countries.

Already positioned on the global scene, the Boricua released his first eponymously titled album in English, followed by years of success at the beginning of the new century that even led him to release a compilation of his most popular singles. By the mid-2000s, hits followed, such as his Unplugged show, recorded in Miami, which included Maria and Vuelve, and a new edition of his greatest singles with the album 17, to commemorate his 17 years on the music scene. After several years on the road for the Puerto Rican’s music, the pop singer found his comeback with the rise of reggaeton and son latino with his wedding, the arrival of his children and, therefore, the formation of a family.

The collaborations between Ricky Martin and Carlos Vives or with Maluma were what brought the Puerto Rican back to the music scene. He does not marry a single genre or a single language, in a symbol of resilience and adaptation as incredible as surprising.

This is how “Livin’ la vida loca” was born

“Livin’ la vida local” was composed by composer and producer Desmond Child. The Cuban says that while they were recording the Boricua’s new album, the famous Frank Sinatra had passed away, so his music did not stop playing on radios around the world.

In addition to being innovative for Latin music, it was also innovative for technology, since at that time the now necessary Pro Tools program was used. From that moment on, the composers knew it would be a success and a big step for Latin American culture.

If the Shrek movies are one of your favorites, chances are you have seen this song as part of a parody.