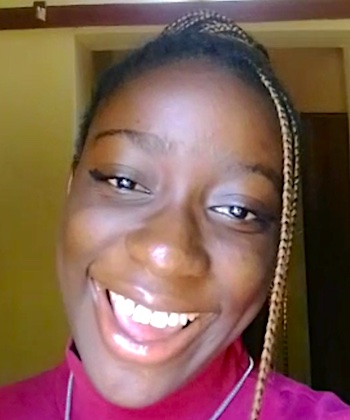 The song “Can't let you go”

Grace: “Hi, I am from Sierra Leone. My goosebump moment was the first time I listened to “Can’t let you go” by Ali Gatie. This particular song talks about how hard it is for people to let go of someone that they were very used to, like the first line of the song “I cannot let you go, trust me I have tried, and I still would not know where to go”. That particular line talks about so much, but even more, the song shows the pain people go through while they are trying to let go. You know, losing someone and trying to let go can be a very hard thing, like myself losing someone that was very dear to me at a time when I least expected it was a really hard phase on me. But the song has helped me a lot and there is a line at the ending of the song that says, “No amount of crying, I feel like I was dying every night”. That particular line has shown me that no matter how hard I cry for the people I have lost, it would never bring them back”.

“Can’t Let You Go” by Ali Gatie is one of those songs where the main sentiment is exactly what the title indicates. Ali is addressing a romantic interest, which would be his ex-girlfriend.

This is evident during the first two lines of the song, where he states that he has “tried” and is even now in the process of trying to let her go. Later on, he confirms that they are no longer together, though evidently not willingly. In fact, when she left, she also took the sunshine out of his life, metaphorically speaking.

“Can’t Let You Go” was the first single released from Ali Gatie’s “The Idea Of Her EP”. The song was released on March 12, 2021, although the singer teased this song with a video of himself singing the first verse on Twitter on October 4, 2020. The end of the song is sung in Arabic, Ali Gatie’s native language.

Who is Ali Gatie?

Ali Gatie is an Iraqi-Canadian singer who became a hot name in North American R&B thanks to SoundCloud and YouTube. He has garnered a huge fan base with songs like “Moonlight,” “Can’t Lie” and “Remedy”.

Ali Gatie grew up in the Toronto suburb of Mississauga and founded his own record label called Li$N. He has been featured by outlets such as Billboard, Hypebeast, Forbes, Complex, Genius and more.

Ali started his music career at the age of 18 and recorded his first song in 2016. This decision then led him to drop out of college where he was studying business. In 2017, he won a RhymeStars online competition hosted by Joe Budden. After releasing a series of singles in 2018, he was signed to Warner Records.

The song “Moonlight” would prove to be his first commercial success, garnering nearly 14 million views on YouTube. However, the release of “It’s You” in June 2019 would become his big breakthrough; an “explosive streaming story”. By December 2019, it had surpassed 650 million streams.

On November 8, 2019, Gatie released his debut EP, “You”. A 12-minute feature accompanied the release, which included seven new songs. A snippet of Gatie’s upcoming single “What If I Told You That I Love You,” released on the video-sharing social media app TikTok, went viral and racked up more than 20 million interactions.

A signature style that emerges from social media

Although Alie Gatie is classified as a hip-hop and r&b singer, he himself says he would like to experiment with all genres of music, fusing them to his own style.