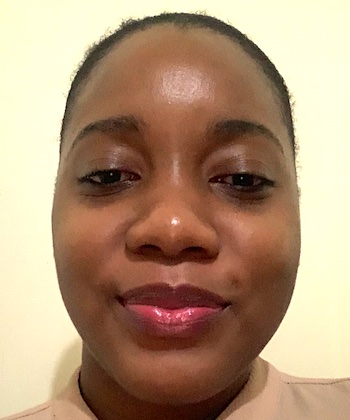 “Hi! my name is Audra and I am from Jamaica. My goosebump moment definitely happened after hearing the song “Corner” by Tarrus Riley, Masicka and Dunw3ll. It is a beautiful, upbeat song, but the message is what really resonated with me. It brings tears to my eyes whenever I hear it, and not in a sad way but in a beautiful way. It just reminds me of the kind of relationship that my younger brother and I have. We grew up basically as each other’s shadow and, you know, we have not been in each other’s presence physically, for a number of reasons, in the last couple of years, which has been tough. But we have managed to, you know, stay connected and maintain our relationship and just stay in each other’s corner and that song is just a powerful message. And it just reminds me of our relationship. I would encourage anyone to listen to that song if you can relate.”

“You can trust me. Yes, you can”. These are the lines that open the lyrics of the song, sung by Masicka and Tarrus Riley. The incredible mashup also features producer Mario Dunwell. It’s not uncommon for dancehall and reggae artists to team up, but this song reflects how sublime the collaboration of two powerhouses in their respective genres can be. Riley, who is an incredible vocalist, opens the song with the chorus, complementing Masicka’s stern deejaying style throughout the track.

A heartfelt and tender message

The video, directed by RD Studio, features Masicka and Tarrus Riley in an open field occupying a white ladder. The video features two relatable scenarios. The first begins with a series of creepy clips inside a motor vehicle. A team of friends is assisted as they head to the emergency room with an injured acquaintance. Fortunately, the person narrowly escapes death by arriving at the hospital in the nick of time, thanks to the efforts of his friends.

Next, the short film took an unexpected turn by addressing the issue of domestic violence. This time, the clip highlighted the role of a friend who comes to the rescue of her friend who is being abused by her partner. Thanks to the friend’s help, the woman can escape her dire situation.

At the end of the video, Jamaican producer Mario Dunwell, who became famous for Vybz Kartel’s 2016 hit “Fever,” made a cameo during the video’s final chorus that moves to tears with the heartfelt and tender message. Having someone by your side to support you through thick and thin, regardless of kinship, is a precious thing.

The tone of the song is especially appreciated, as lately many people are calling for more conscious music and asking for a stop to tunes centered around guns and violence. Masicka and Tarrus certainly knew what they were doing when they chose all-white outfits, as the serenity and peace of the visuals are undeniable.

Tarrus Riley songs are loved in the reggae and dancehall scene

Riley was born in the Bronx, New York, and was raised in Jamaica. His father, Jimmy Riley, was a veteran reggae singer. Tarrus made his recording debut as a teenager. In 2004, he released his debut album, “Challenges”.

Riley has continued to accumulate awards for his work. His awards include best singer, male vocalist, cultural artist, song of the year and best song. Some of the institutions that have awarded Riley are the Youth View Awards, the Star People’s Choice Awards, the EME Awards and the Reggae Academy Awards. He is the holder of Jamaica’s CVM TV 15th Anniversary Award, held in February 2009, for the “Most Admired Song in the last 15 years” for the hit song “She’s Royal”.

In 2009, Riley released his third album, “Contagious”, with Cannon Productions. The album was distributed by VP Records. It contained the hits “Start Anew”, “Contagious”, and “Good Girl Gone Bad” featuring Konshens and Superman, a cover of a Robin Thicke original. In 2010 the hit “Protect the People” was released, which climbed several charts in Jamaica and throughout the Caribbean. Early 2011 saw the release of the black history themed “Shaka Zulu Pickney,” which was included on a nyabinghi rhythm album from Bombrush Music. The video for the song, directed by Storm Saulter, was well received upon its release. His interest in educating young people about black history led to the Tarrus Riley Freedom Writers contest, which aired on Jamaica’s Irie FM radio station.

Masicka, Javaun Fearon, is a multifaceted Dj, singer and songwriter of the Jamaican dancehall scene. He started his career as a local DJ with a lyrical flow of exquisite melodies and harmonies. His musical journey began by performing at local talent contests in his hometown of Independence City in Portmore, popularly dubbed by Masicka as “Sin City”.

He is popular for releases like “Dem Ago Dead” and music genres like dancehall. Apart from these, he has also done some amazing projects like “The Tyler and Puffy Saga Part 1 & 2”.

Since he was very young, Dunw3ll was dropping coins to determine how far the sound waves of a music career could go. Being a producer in the reggae and dancehall scene meant dedicating a lot of time.

It was around 2006 when the experimentation began. Perceived as a silent star in the galaxy of Jamaican music producers, Dunw3ll alludes to his guest appearances in music videos for productions such as Jahmiel’s “U Me Luv”, Masicka’s “Just A Minute”, and “Corner”, a collaboration with Tarrus Riley and Masicka that trended on YouTube since its release.

He has worked with a wide roster of dancehall greats including Popcaan, Jahvillani, Dexta Daps, Ding Dong and Munga Honorable.