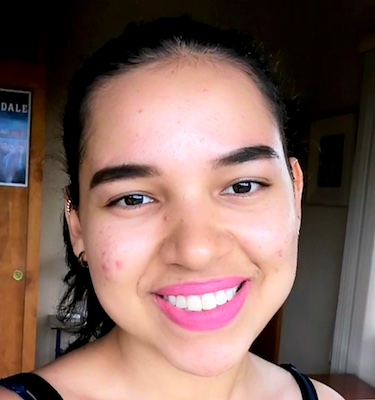 Cristhel: “Hello everyone, I come from Nicaragua, but I live in Costa Rica. My goosebump moment was when I was driving my car and when I heard for the first time the song “Driver’s License” by Olivia Rodrigo. I knew Olivia Rodrigo because she is an actress from the Disney Channel, but I did not know the songwriter talent she is. While I was listening to the song, I felt everything that she was saying, and the lyrics were so indescribable. It was amazing, the feeling that I had at that moment. This song talks about what we all have felt once in a life. A heartbreak. I hope you enjoy it.”

A story of heartbreak

This 2021 the music industry was surprised by the success of Olivia Rodrigo who released “Driver’s License”, a song that has become the first hit of this year, becoming the most listened to song on music platforms.

This song was born out of heartbreak and has its origins in the Disney+ series “High School Musical: The Musical, The Series”, where the singer plays Nini Salazar-Roberts and where she met Joshua Bassett, with whom she had a relationship and on which Rodrigo based this song that gives us goosebumps.

Who is Olivia Rodrigo?

Many fans of Disney programming may know Olivia Rodrigo from her work as an actress in “High School Musical: The Musical: The Series”. However, for pop culture fans who have yet to tune in to the Disney+ series, Rodrigo’s name rings a bell for an entirely different reason. The young performer positioned her career thanks to her song “Driver’s License” which hit the charts in January 2021 and has not stopped making waves since.

Rodrigo was born in California in 2003. When she was only six years old, Rodrigo started taking acting classes, with the goal of breaking through in the entertainment industry. It did not take her long to break through, and she quickly began booking commercials for brands like Old Navy. Shortly after her television debut in commercials, Rodrigo began landing bigger roles, and in 2016, she began appearing in a lead role on the Disney Channel series “Bizaardvark”.

For three seasons, Rodrigo played Paige Olvera in “Bizaardvark”. Following her work on that series, the young actress was cast in the 2019 Disney+ production “High School Musical: The Musical: The Series”.

The inspiration for the hit tune

The hit “Driver’s License” is a lyrical journey about a girl driving around her hometown, seeing old friends and acquaintances and reliving the love story she shared with her former partner. Some fans have speculated that the song could be a reference to Rodrigo’s own rumoured relationship with Joshua Bassett, her co-star in “High School Musical: The Musical: The Series”.

According to Insider, “Driver’s License” not only appears to reference Bassett, but also his rumored girlfriend, Sabrina Carpenter. Bassett has indirectly alluded to being the subject of the song by selling merchandise that references her, but as for Rodrigo, she has never commented on whether Bassett provided the inspiration for the hit tune.