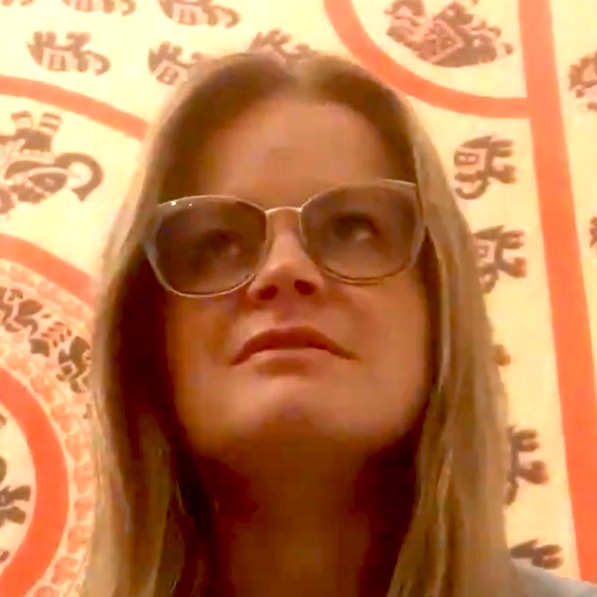 Lana: “I’m from Croatia. So what really gives me goosebumps, like my goosebumpmoment is when I hear a song called “Molitva”, which literally means “prayer”. And it’s by a Serbian singer Marija Serifovic and why it gives me goosebumps is because the spot for that song was published almost a year ago during the quarantine time and it shows like the empty streets of the capital of Serbia, Belgrade, and only her and her band are singing, helping other people, bringing them food, and everybody is with the masks and all the streets, all the corners are literally empty. And it just shows how actually during the quarantine time last year like the world was desperate. So it really gives me like the lyrics of the song and how that city represented like in the whole world how the situation was. That really gives me like, wow, a special feeling and I feel emotional every time that I see this video.”

“Molitva” in the streets of Belgrade

Singing is not only done from a stage and, as a result of these times of quarantine due to the pandemic, many artists have demonstrated it. Such is the case with Marija Šerifović, whose song “Molitva” brought the Eurovision Song Contest to Serbia in 2008.

Marija recorded her winning song in the empty streets of Belgrade in 2020, and the video was released on May 16th of that year, during “Europe Shine A Light”. For her fans it was a goosebumpmoment, not only because of the emotional content of the song already known since 2007, but also because of how inspiring this video has been because it sets a precedent and when looking at it in retrospect, it makes it possible to understand what was happening in the world at that particular time.

Serbian Marija Serifovic was the winner of the 52nd Eurovision Song Contest in Helsinki with her song “Molitva” (“Prayer”), a moving ballad that captivated millions of European viewers.

The young Serbian interpreter obtained 268 points and prevailed with authority in the contest, beating the Ukrainian “drag queen” Verka Serduchka, who took second place, followed by the Russians from Serebro, the Turkish Kenan Dogulu and the Bulgarians Elitsa Todorova and Stoyan Yankoulov.

The vote to elect Marija Serifovic

The vote was made by viewers from 42 European countries through landline and mobile phone calls and reflected the political, religious and ethnic affinities of the different European states.

The young singer, who showed a great personality on stage, used her magnificent voice to move the Finnish public and confirm her status as a favorite in the betting and internet forums.

The lyrics of “Molitva” are written by Sasa Milosevic Mare and the music is written by Vladimir Graic.

Serbia, which appeared for the first time in Eurovision after its separation from Montenegro, won the Festival as Yugoslavia in 1989, in Lausanne (Switzerland), with Riva and “Rock me”. In addition it was also the first song not written in English that obtained the victory since 1998; Ruslana’s 2004 “Wild Dances” winning song had parts in Ukrainian but also phrases in English.

Marija’s performance was complemented by the presence of five female backup singers, who later merged to form the group Beauty Queens.

Two days after the finale, the song was accused of possible plagiarism of the Albanian song “Ndarja” by artist Soni Malaj. This was firmly denied by Marjan Filipovski, the Macedonian songwriter from Ndarja.

“Molitva” was also performed on many other events that Serbia had in 2007. It was performed at a welcome party for Serbian tennis players after their success at the French Open.

At the Eurovision 2008 final, which took place on May 24 in Belgrade, Marija sang “Molitva” to kick off the gala.

Who is Marija Serifovic?

Marija, who was born on November 14, 1984 in Kragujevac into a family of musicians, began singing at the age of 12 and was already able to sing songs like “I will always love you” by Whitney Houston at that young age.

She grew up in a dysfunctional home due to his father’s alcoholism. His mother Verica Serifovic is a well known folk singer.

Marija has performed at political events for the Independent Serbian Democratic Party and the Serbian Radical Party.

She and Austrian Conchita Wurst are both winners of the Eurovision Song Contest.