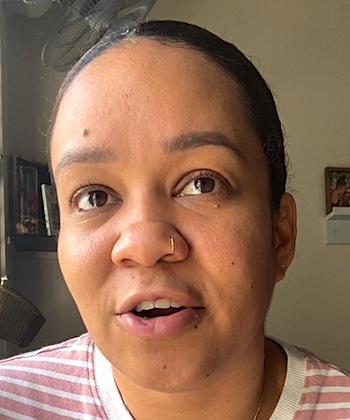 “Hi! My name is Stacy and I am from Kingston, Jamaica. So, my goosebump moment is a little weird, and I will tell you why. There is a soca artist by the name of Kes. He has a song called “Savannah Grass” and every time, every single time that I hear the instrumental to this soca song, I get all the feels like I feel like I want to cry, I just feel very emotional. And it is strange because I do not like soca. Soca is not my preferred genre of music. So, it is strange that a soca song would be the thing to give me the feels and goosebumps. The last time I heard it was before covid ever existed and we were outside at a party and there is just something about when that song plays and the instrumental of it, the way the music, the piano, everything comes together, it is just a beautiful experience. That is my goosebump moment.”

A unique blend of island rhythms

Through a fusion of rock riffs and island rhythms, touches of soca and reggae, and best be described as Caribbean Pop, it has elevated Kes to the big leagues, allowing them to become a household name in Trinidad and Tobago and throughout the Caribbean circuit, where they consistently generate audiences for their high-energy performances.

Kes, commonly known as Kes the Band or KTB, is a soca band formed in Trinidad and Tobago in 2005. The band’s musical style consists mainly of soca, influenced by calypso, dancehall and reggae, with elements of other genres such as rock and dance.

This group stands out for their energetic live performances and the soulful voice of the lead singer (Kes). The band has captured the hearts of many and has become one of the most popular and acclaimed bands in Trinidad and Tobago, the Caribbean, the United States and Canada.

In 2006 the band released their debut studio album titled “Three Baldheads and a Dread”, a reference to the band members’ hairstyles, which dominated as #1 on the Toronto charts for 9 consecutive weeks.

In 2007 they released their second album “Lion”, also the title track, an inspirational and motivational song, as well as carnival hits “My Land”, with which Kes and Nadia Batson placed second in the International Soca Monarch Competition in Trinidad & Tobago, “Our Prayer” and reggae influenced songs, “Limin” and “Bigger Brighter Day”.

The band’s third album was released on February 10, 2009 and was titled “On In 5” and included a mix of old and new songs as well as live performances.

In 2010 the song “Let Me Know” was chosen by Six Flags to be played throughout their theme parks as well as American Airlines programs. During that year the band also made a major accomplishment performing live on the BBC World Channel and was seen by millions worldwide.

In 2011, KES continued to show growth with the release of their fourth album “Wotless”. The title track was one of the most popular songs of the 2011 carnival season in Trinidad and Tobago, as well as many carnivals in the region. “Wotless” was born out of a collaboration between KES and songwriter, producer and singer Kerwin Dubois.

Kes won the international Soca Groovy competition that year with “Wotless” followed by an unforgettable performance at the Friday Carnival at the Hasely Crawford Stadium in Trinidad. The song continues to break boundaries and positions the band in new markets around the world.

In 2012, this band collaborated with Snoop Dogg on a remix of their Carnival release “Stressaway”. The single was well received and marked new territory for Kes. Since 2005 Kes has released five albums that have made a huge impact on his musical career as well as his audience.

This musical genre originated in Trinidad and Tobago and is popular in Venezuela, specifically in the Northeastern Region (Güiria) and the Guayana Region. It is derived from calypso, which in turn comes from kaiso, and is musically quite close to dancehall.

Soca combines the danceable melody of calypso with insistent percussion. Soca music has evolved in the last twenty years mainly driven by musicians from Trinidad and Tobago, St. Vincent and the Grenadines, Barbados, St. Lucia, Antigua and some bands from St. Kitts and Nevis, Jamaica, Venezuela, Costa Rica, Panama, and Lesser Antilles. The origin of the word is the abbreviation of soul calypso.