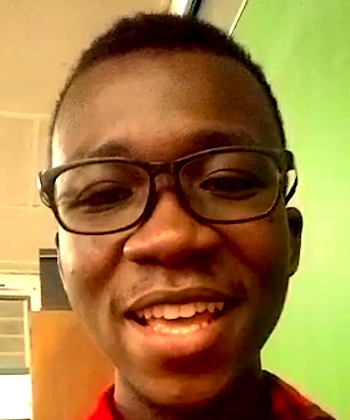 The concert of Richard Bona

Japhet Koussoube: “Hello! I am from Burkina Faso. My goosebump moment goes back to 2018 when I watched the concert of Richard Bona titled “Vocal solo”. I am a musician and I was really impressed with such a performance. The way he had fun with his voice with such precision. Especially the ease with which he expressed his music on stage, some combination of musical notes, the variations or the color of melodies were wonderful to the point of often I started screaming “oh my God! How can a man do such a thing?”, unbelievable. It is still an exceptional artistic creation.”

African rhythms, virtuosic bass lines and feather-light singing in the tradition of West African griots: Richard Bona weaves these ingredients into music for the head, the heart, and the feet. Bona is one of those musicians you don’t meet twice. His voice is unique and his electric bass playing makes him one of the most sought-after musicians in the world.

Richard Bona, now considered one of the world’s leading exponents of the electric bass, is famous for his musical intuition and fine vocal improvisation, something that has led him to explore new musical styles. The Cameroonian has been at the top of the international jazz scene for more than two decades, with nine albums released, including his latest “Bonafield” in 2013.

Who is Richard Bona?

Bona Penda Nya Yuma Elolo was born in Minta, Cameroon, into a family of musicians, which allowed him to start learning music at a very young age. Her grandfather was a griot, a West African praise singer and storyteller, and a percussionist, as his mother was a singer.

At the age of four, Bona began playing the balafon and at five, he started performing in his village church. Not being wealthy, Bona made many of his instruments himself: flutes and guitars, with strings attached to an old motorcycle tank.

His talent was quickly noticed, and he was often invited to perform at festivals and ceremonies. Bona began learning to play guitar at the age of 11, and in 1980, at just 13, he put together his first ensemble for a French jazz club in Douala. The owner befriended him and helped him discover jazz music, particularly that of Jaco Pastorius, which inspired Bona to shift his focus to the electric bass.

At the age of 22, he emigrated to Germany to study music in Düsseldorf, and soon moved to France, where he furthered his musical studies. In 1995, Bona left France and settled in New York, where he still lives and works. In New York he played bass with artists such as Joe Zawinul, Larry Coryell, Michael and Randy Brecker, Mike Stern, George Benson, Branford Marsalis, Chaka Khan, Bobby McFerrin, and Steve Gadd.

His first solo album, “Scenes from My Life”, was released in 1999. He has also been featured prominently on Jaco Pastorius’ Big Band albums, as well as many other albums by a variety of top jazz musicians.

One of the most accomplished international bassists

Richard Bona is a Grammy-winning musician, one of the most accomplished international bassists, with a distinctive sound in which he brings to bear his multi-instrumentalist and vocalist talents. Representing his African origins, Bona’s music addresses the problems of the continent, as well as other global struggles. His purpose, and the unique way he connects with his audience, have made him a staple name in world jazz.

Bona has toured, recorded, and created musical art forms with the greatest. In addition to various notable collaborations, Richard has also taught Jazz Improvisation at New York University and is continually teaching and mentoring young talent around the world.

Along with his management, Quincy Jones Productions, he is heavily involved in the development of best practices and ethics in the music business. His Signature Series collaboration with Italian brand Markbass has positioned him as one of the world’s most creative and best-selling custom amp and bass manufacturers.

Constantly touring the world and exploring new musical directions, Richard Bona continues to redefine his sound, while continuing to perform live with his big band and jazz projects, as well as his Afro-Cuban band Mandekan Cubano.